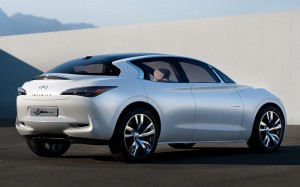 Infiniti, is a high-end brand subsidiary of Nissan. It was founded in 1989 but revamped as a global brand last year, focused on innovation and younger drivers, as well as a conscious effort to distance itself from its Japanese parent company. It aims to overtake the likes of Toyota’s Lexus, Honda’s Acura and Hyundai’s Genesis brands in the battle against luxury’s Big Three of Audi, Mercedes-Benz and BMW.

Best established brands such as Mercedes, Britain’s Jaguar or the luxury car industry’s leader Ferrari come from generations of motor-racing pedigree or association with the world’s upper-crust of society to position their brand and enhance their desirability.

Similar to Nissan strategy, Infiniti plan is to break through the established order with cars that promotes technology over tradition and tempt younger drivers away from more established brands.

“Our product is for the younger consumer with a higher propensity to change,” said Mr Knight after ceremony at Nissan’s factory in Sunderland, UK, which will build Infiniti models from 2015. “Our orientation is to build a seductive, high-technology product and brand . . . The generation after Generation X are hyper connected and have a desire to express themselves,” Mr Knight added.

The firm announced near the end of last year that the Wearside factory was to build a new model, the Q30, for its Infiniti luxury brand from 2015. The new car requires its own factory shop at the plant and also requires an extension to the final assembly area. Work on the project began on 13 October, at the ceremony including executive vice-president, and former Sunderland plant boss,Trevor Mann.

Sunderland will be one of just four Nissan plants worldwide building cars for the Infiniti brand and the Q30 will be exclusively built on Wearside.

“Securing the Infiniti Q30 for production at Sunderland was a tremendous achievement by the workforce and reflects the quality levels which they have reached,” said Mr Mann.

“The existing Sunderland plant is already the largest in UK automotive history and this 250 million pound investment will move the plant even further up the value chain, and reconfirm our commitment to their future.”

Infiniti is boosted its product range by 60% and almost doubed its engine offerings as it targets 500,000-600,000 annual sales within 10 years, almost four times increase of last year sales. Europe will account for 150,000 of those sales, the company said.

The high-end car brand has already created a hype in the US, where it sells 85% of its roughly 170,000 annual global sales. Keeping in mind, the US accounts for around 30% of luxury car sales, but it will need improvement in Europe which accounts for closer to 40% along with fast-growing China luxury market.