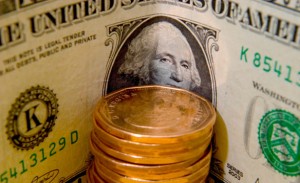 US dollar retreated to session lows against its Canadian peer on Friday, after an official report revealed that Canadian unemployment rate decreased in September, while the number of employed people was less in comparison with the preceding month, but still surpassed projections.

In a report earlier today Statistics Canada said that the rate of unemployment in the country fell for a second consecutive month in September to reach 6.9% from 7.1% in August, while experts had anticipated that the rate will remain unchanged. This was the lowest unemployment rate since December 2008. At the same time, the number of employed people increased by 11 900 in September, slowing down compared to 59 200 people, who started work in August. Preliminary estimates pointed that Canadian economy will add 10 000 new job positions in September. Overall results have been supported mostly by hiring new employees in the sector of financial services and in the mining industry.

Canadian dollar snapped a series of four consecutive daily losses against the greenback, as US lawmakers were approaching a debt-ceiling agreement, even as they remained at odds on the matter of the partial government shutdown. US President Barack Obama and House Republican leaders held a meeting for 90 minutes at the White House on Thursday, after House Speaker John Boehner said that he would offer a measure to postpone a potential US default from October 17th to November 22nd. The president did not accept or reject Republicans’ proposal for a short-term increase in the debt ceiling. The two sides were planning further debates among their staff members.

“Today feels like a bit of a catch up to your standard, across-market responses to the optimism that kicked off yesterday with some sense that we could reach a resolution to all the shenanigans in Washington,” said David Tulk, chief Canada macro strategist with TD Securities in Toronto, cited by Bloomberg. “To the see that at the expense of the U.S. dollar, the expense of the Japanese yen, looking at strength across the board led by commodity currencies and everything else seems to be appropriate.”

Meanwhile, the crucial string of economic data, including retail sales and producer price inflation, out of the United States has not been released.