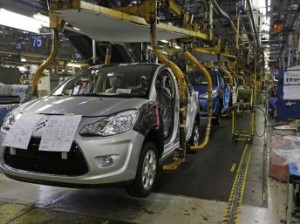 Peugeot Citroën offered to boost French factory production and put off any plant closures until at least 2016, as labor cuts negotiations aimed at diminishing costs in the auto makers home market.

Struggling from declining automobile sales and market share in Europe, the unprofitable company said on Wednesday it is prepared to increase its French production 7.5% to one million cars a year and avoid closing any factories before 2016, provided it reaches a cost-saving agreement that it has been negotiating with its labor unions since spring.

“We want to maintain an industrial base in France,” Philippe Dorge, the companys director of human resources, said during a break in negotiations with labor unions at the companys Paris headquarters.

Peugeots labor talks are part of the companys broader plan to adapt to the unpleasant reality of Western Europe, where its new-car registrations fell 13% in the first eight months of 2013, while the broader market was down just 5.3%. Sales are expected to follow this decline. Most of Peugeots French factories currently operate at far less than full capacity, making them fountains of red ink.

President of France Mr. Hollande said last year that the state would not be “indifferent” to Peugeots decision to slash 8,000 jobs and close its Aulnay plant near Paris in 2014.
Speaking on national television, the French president insisted that he would press the company to amend the plan. “The plan in the current state is not acceptable, it won’t be accepted,” he said.

The auto maker has said it plans in its current labor negotiations to push workers to agree to a slower rate of salary increases, and agree to other cost-saving moves, such as part-time working schemes, in order to bring its French plants back to break-even in the next three years.

In return, the company promised it would launch one new model in each of its assembly factories in France, and commit to investing €1.5 billion ($2.02 billion) in its factories between 2014 and 2016—an amount that Mr. Dorge said would be an increase from the prior three-year period. But that would only happen if the European car market will bounce back to sales of around 15 million cars a year by 2016. In 2012, new-car registrations in the EU fell to 12 million.

Earlier this year, Renault SA signed a cost-cutting deal with French unions that increases labor flexibility and reduces head count. In return, Renault has promised to boost production of cars in France.