Uber is the leading global ridesharing app. As of July 2022, the Uber platform is used by over 93 million customers across the globe, with about 3.5 million drivers serving them. The Uber ridesharing service is available in 74 countries.

Although Uber is available in many locations, its popularity and usage vary from country to country. According to a recent survey published by Statista, the top five countries where Uber is most popular are: Brazil, India, Australia, the UK and the US. In Brazil, 43 percent of online urban respondents reported that they have used the app in the last year. Uber’s usage is also high in India, with 42 percent of the respondents using the platform in the last 12 months. In Australia, 29 percent of the people surveyed have used the app over the same period. The UK and the US complete the list of top five countries by use of the Uber app, with 22 percent and 18 percent respectively.

TradingPedia‘s editorial team analyzed some of the factors affecting Uber’s popularity and usage in the above-mentioned countries, including competition from other ridesharing apps, the availability of comfortable public transport systems and, the Uber fares in these countries. 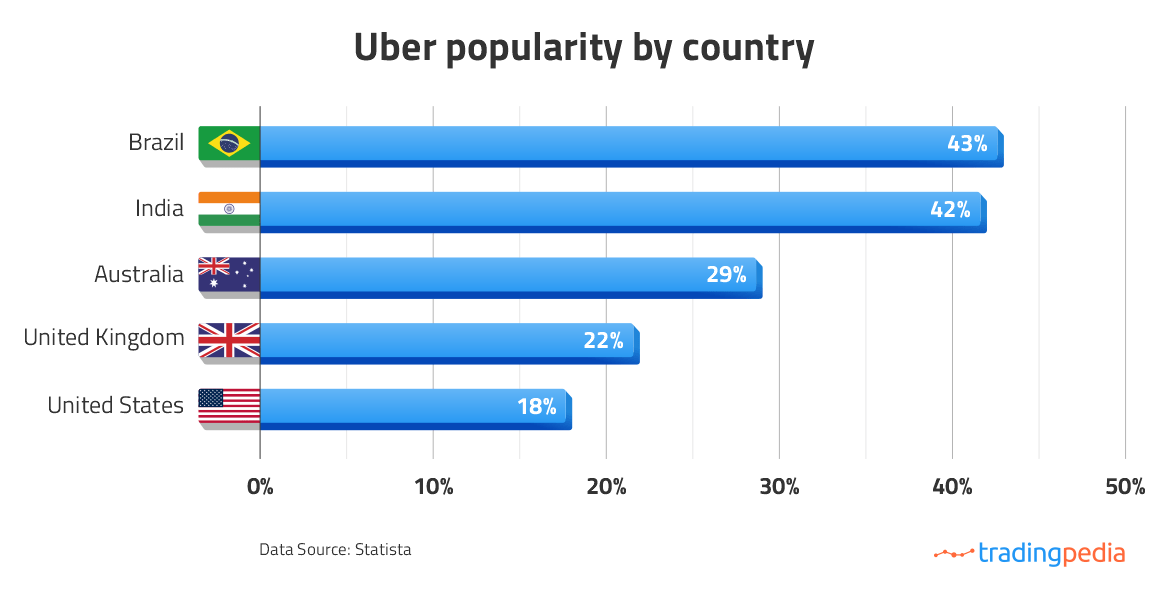 One of the most important factors that determine Uber’s usage in any country is the competition with other ridesharing services. For example, in the US, Uber faces competition from Lyft, DiDi, OLA Cabs, Bolt, Grab, and local taxis.

In Australia, Uber faces competition from multiple other ridesharing apps, such as OLA Cabs, Didi, Bolt, Go Catch, and Shebah.

It is, therefore, not surprising that Uber is more popular in Brazil and India, where people do not have many other options for private rides compared to the US and the UK where many ridesharing apps are available.

Does the availability of comfortable public transport system matter?

Both Brazil and India do not have a well-developed and efficient urban mass transport system that is comparable to those of the US, the UK, and Australia. Brazil’s metro system serves only 5% of the population, with none of the lines connecting cities to their suburbs.

Similarly, in India, the demand for better means of transportation is ever increasing, having in mind its urban population growth. With the inadequacy of the mass urban transport system, Uber’s huge popularity and usage in India is not unexpected.

Uber fares in the top 5 countries

Uber offers different grades of rides, categorized into UberX, UberXL, UberPOOL, UberSELECT, UberLUX, and so on. The fare varies for which grade of ride you want. UberX offers the most basic services and is available in all countries where Uber operates, which is why we take it as a subject of our analysis.

Generally, the price of each UberX trip is calculated based on these components:

What is Uber’s average fare per kilometer in the top 5 countries?

It is almost impossible to come up with a definitive or average price for any given country since its pricing varies with every city. We estimated the fare in some of the most popular cities where the Uber app is available:

To estimate Uber’s fare per kilometer, we used Taxifarefinder to calculate the average cost of an Uber ride for a trip between two popular locations, and then divided the cost by the distance. Uber fees are charged in the local currencies of these countries, so we converted them to USD to have a uniform currency:

The average fare per kilometer has some influence on Uber’s popularity across the globe, as the app is far more popular in Brazil and India where the services are cheapest, compared to Australia, the UK and the US.

In conclusion, many factors determine Uber’s popularity and usage in different countries. Some of them include competition from other ridesharing apps and traditional taxi services, the availability of comfortable and efficient public transport system, and Uber’s average fare rates in the respective country.