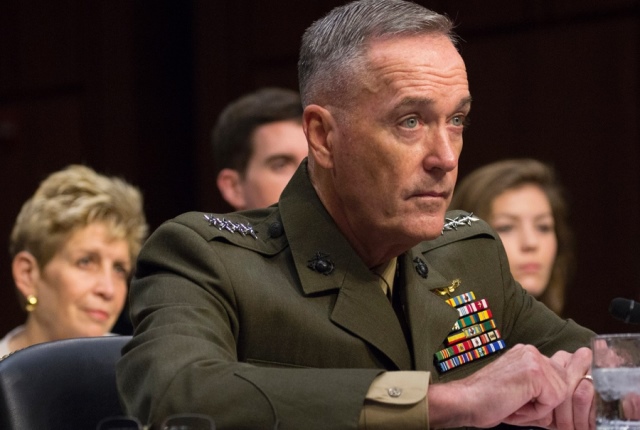 Lockheed Martin Corp (LMT) said on Friday that General Joseph F. Dunford Jr., former Chairman of the Joint Chiefs of Staff, had been elected to its Board of Directors, effective February 10th.

Lockheed Martin shares closed lower for the fourth time in the past ten trading sessions in New York on Monday. The stock inched down 0.03% ($0.12) to $432.38, after touching an intraday high at $434.34 and also a fresh all-time high.

Dunford, a retired US Marine Corps general, is to serve on Lockheed Martin’s Classified Business and Security Committee and Nominating and Corporate Governance Committee.

“General Dunford’s service to the nation at the highest levels of military leadership will bring valuable insight to our board,” Marillyn Hewson, Chairman, President and Chief Executive Officer of Lockheed Martin, said in a statement.

“His experience in complex, global operations and risk management, including cybersecurity threats, is a tremendous asset and will enhance board oversight in key business areas,” Hewson added.

Dunford served as the 19th Chairman of the Joint Chiefs of Staff, the highest-ranking military officer and the principal military advisor to the President, Secretary of Defense and the National Security Council, from October 2015 until September 2019, when he retired.

The same media also reported that at least 12 out of 22 surveyed investment analysts had rated Lockheed Martin Corporation’s stock as “Buy”, while 9 – as “Hold”.