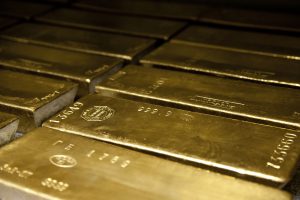 On the Comex division of the New York Mercantile Exchange, gold futures for delivery in December were edging up 0.12% on Friday to trade at $1,369.0 per troy ounce. The precious metal went up as high as $1,371.0 during late Asian trade, while the current daily low was at $1,365.3 per troy ounce, recorded during the early phase of the Asian trading session.

The US Dollar Index, a gauge reflecting the relative strength of the greenback against a basket of 6 other major currencies, was edging down 0.18% on the day at a level of 95.58, after going down as low as 95.54 earlier. The gauge has gone up 0.09% so far during the current month, following a 0.74% retreat in July.

The precious metal appreciated sharply on Thursday, after Bank of England announced a considerable stimulus package. The Bank rate was axed by 25 basis points to a new all-time low of 0.25%, in line with expectations, while the Bank’s asset purchase program was expanded by GBP 60 billion to GBP 435 billion per month. In addition, BoE introduced a new Term Funding Scheme, which is to provide funding for banks at interest rates close to Bank Rate.

Today gold trading may be strongly influenced by the government report on US non-farm employment. Employers in all sectors of economy, excluding the farming industry, probably added 180 000 new jobs in July, according to the median forecast by experts, after a job gain of 287 000 in June. The latter has been the fastest growth rate since October 2015, when a revised up figure of 298 000 was reported. Total non-farm payrolls account for 80% of the workers, who produce the entire Gross Domestic Product of the United States. Therefore, in case of a lower-than-expected gain in jobs in July, demand for the US dollar would be strongly pressured, while this would be a strong bullish impulse for gold.

Meanwhile, the rate of unemployment in the country probably decreased to 4.8% in July, according to market expectations, from 4.9% in June. The Bureau of Labor Statistics will release the official employment data at 12:30 GMT.

At the same time, the deficit on US balance of trade probably widened to USD 43.10 billion in June, according to market expectations, from a deficit figure of USD 41.14 billion in May. If so, this would be the largest deficit since February, when a revised down gap of USD 46.96 billion was reported. In case the trade balance deficit widened more than anticipated in June, this would have a strong bearish effect on the US dollar and a strong bullish effect on gold, because of the negative implications in regard to economic growth. The Bureau of Economic Analysis will release the official trade data at 12:30 GMT.

This is another set of macro data, which will provide further clarity if economic development in the country is resilient enough, so that it can warrant a rate hike by the end of the year.

According to CME’s FedWatch Tool, as of August 4th, market players saw a 9.0% chance of a rate hike occurring at the Federal Reserve’s policy meeting in September, down from 12.0% in the prior business day, and a 10.9% chance of a hike in November, down from 15.6% during the preceding day. As far as the December meeting is concerned, the probability of such a move was seen at 32.1% on August 4th, down from 39.8% in the preceding business day.

Meanwhile, silver futures for delivery in September were losing 0.66% on the day to trade at $20.307 per troy ounce, after going down as low as $20.285 a troy ounce during the early phase of the European trading session.

By employing the Camarilla calculation method, the daily levels of importance for gold are presented as follows:

By using the traditional method of calculation, the weekly levels of importance for gold are presented as follows:

In monthly terms, for the yellow metal we have the following pivots: