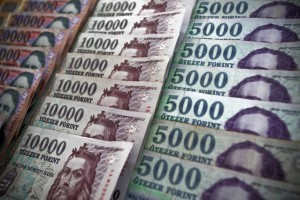 On Friday USD/HUF trading may be influenced by the following macroeconomic reports and other events as listed below.

The New York Empire State Manufacturing Index probably improved to a value of 1.00 in April, according to the median forecast by experts, from 0.62 in March. If market expectations were met, this would be the highest index reading since July 2015, when the gauge was reported at a level of 3.86.

In March the gauges for new orders and shipments registered levels well above 0.00 for the first time in the past several months, while employment levels remained stable. In addition, the six-month outlook improved, as the index for future new orders reached a level unseen in over a year.

Index readings above 0.00 are indicative of improving business conditions in the region. Higher-than-anticipated index values will usually have a moderate bullish effect on the US dollar. The Federal Reserve Bank of New York is expected to release the official reading at 12:30 GMT.

Industrial output in the United States probably rose at a monthly rate of 0.1% in March, according to market expectations, following a 0.5% contraction in the prior month.

In February output in the US mining sector decreased 1.4%, while contracting at an average pace of 1.3% during the last 6 months.

The gauge for utilities registered a 4.0% monthly decrease in February, as demand for heating diminished due to unusually warm weather.

In case the general index of industrial activity advanced more than anticipated in March, this would be dollar positive. The Board of Governors of the Federal Reserve is to release the production data at 14:15 GMT.

The monthly survey by Thomson Reuters and the University of Michigan may show that consumer confidence in the United States improved in April. The preliminary reading of the corresponding index, which usually comes out two weeks ahead of the final data, probably rose to 92.5 during the current month from a final reading of 91.0 in March. The latter came well above the preliminary reading of 90.0, which was reported on March 18th. If expectations were met, Aprils reading would be the highest since December 2015, when a level of 92.6 was reported.

The sub-index of current economic conditions fell to a final reading of 105.6 in March, while matching the preliminary value, but falling from a final 106.8 in the preceding month.

The sub-index of consumer expectations came in at a reading of 81.5, up from a preliminary value of 80.0 in March, but down from a final reading of 81.9, registered in February.

Participants in the March survey expected that the rate of inflation will be at 2.7% during the next year, or matching the rate in the preliminary release, but higher than the expected rate in the February survey.

In case the gauge of consumer sentiment increased at a steeper pace than projected in April, this would have a moderate-to-strong bullish effect on the greenback. The preliminary reading is due out at 14:00 GMT.

At 16:30 GMT the Fed President for Chicago, Charles Evans, is expected to take a statement. His remarks may introduce limited-to-moderate volatility of the currency pairs containing the US dollar.

By employing the Camarilla calculation method, the daily pivot levels for USD/HUF are presented as follows:

By using the traditional method of calculation, the weekly pivot levels for USD/HUF are presented as follows: