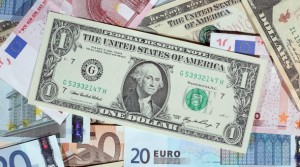 Today EUR/USD trading may be influenced by a number of macroeconomic reports as listed below.

Business climate in Germany probably remained unchanged in November, with the respective gauge remaining at 108.2, according to market expectations. It has been the lowest level since July, when a reading of 108.0 was reported. In September the gauge for business climate stood at 108.5.

The IFO Business Climate Index is comprised by two equally-weighted sub-indexes – a gauge of expectations and a gauge of current assessment. The IFO expectations index probably slipped to 103.5 in November, according to expectations, from 103.8 in October. The IFO current assessment index probably dropped for a third straight month in November, falling to 112.3. If so, this would be the lowest reading since March, when the gauge was reported at 112.0. In October it stood at 112.6.

In case the Business Climate Index came above expectations in November, this would have a moderate bullish effect on the single currency. The CESifo Group is expected to release the official numbers at 9:00 GMT.

The second estimate of the US Gross Domestic Product probably pointed to an annualized rate of growth of 2.0% in the third quarter of 2015, according to the median forecast by analysts. The preliminary GDP estimate for Q3, reported on October 29th, pointed to an annual growth of 1.5%. In Q2 economy expanded at an annualized rate of 3.9%, according to final data. The preliminary report showed that growth was supported by higher business and consumer spending in Q3, while the change in private inventories had a negative contribution.

Real personal consumption expenditures rose 3.2% during the third quarter, following an increase by 3.2% in Q2, which added 2.2 percentage points to growth. Fixed investment expanded 2.9% in Q3, or slowing down from a 5.2% surge in the prior quarter, as growth in both residential and non-residential investment was lower.

Business entities accumulated inventories valued at USD 56.8 billion in the third quarter, or the lowest since Q1 2014 and considerably lower compared to inventories in Q2 (USD 113.5 billion). This low inventory buildup subtracted 1.44 percentage points from growth.

Government expenditures rose 1.7% in Q3, following a 2.6% growth in the preceding quarter.

In case the second GDP estimate outpaced market expectations in Q3, this would have a strong bullish effect on the US dollar, because of the heightened rate hike prospects. The BEA is to publish the revised GDP data at 13:30 GMT.

Consumer Confidence Index by the CB

Confidence among consumers in the United States probably improved in November, with the corresponding index coming in at a reading of 99.5, according to market expectations, from 97.6 in October. The latter has been the lowest index value since July, when the gauge was reported at 90.9.

This indicator measures the level of individuals confidence in the US economic development. It is considered as a leading indicator, as it gives an early insight into consumer spending, which accounts for almost two thirds of the nations GDP.

In case the index advanced more than anticipated, this would have a strong bullish effect on the US dollar, as higher confidence suggests a greater willingness to spend and, respectively, an accelerated economic growth. The Conference Board research group is to publish the official index reading at 15:00 GMT.

The yield on German 2-year government bonds went as high as -0.377% on November 23rd, after which it closed at -0.389% to lose 0.003 percentage point in comparison with November 20th. It has been the eighth drop in the past eleven trading days and also a third consecutive one.

The spread between 2-year US and 2-year German bond yields, which reflects the flow of funds in a short term, narrowed to 1.216% on November 23rd from 1.307% on November 20th. The November 23rd yield spread has been the lowest one since November 13th, when the difference was 1.210%.

Taking into account the period January-October 2015 and basing our calculations on weekly closing prices, we came to the conclusion that EUR/USD performance and the development of the yield spread between 10-year bonds in the United States and Germany showed a correlation of -0.6534, or the pair and the spread moved strongly in opposite directions. As the yield spread grew in favor of the 10-year US bonds, the US dollar gained ground against the euro. During the period January-October, EUR/USD has depreciated 7.07%, while the spread between 10-year bond yields in both countries has widened 10.56% to reach approximately 1.62% in late October from approximately 1.47% in early January.