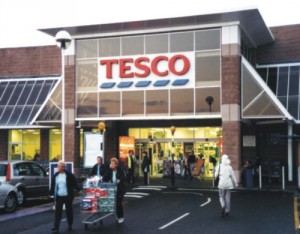 British retailer Tesco Plc has selected Asian private-equity firm MBK Partners LP as the preferred bidder for its business in South Korea, according to people with knowledge of the matter.

Seoul-based MBK won exclusive negotiating rights with an offer of about $6 billion, the people said. The bid of the MBK consortium, which includes the state-run National Pension Service, was backed by Singapore state investor Temasek Holdings and the Canada Pension Plan. The two other bidders were Hong Kong-based Affinity Equity Partners together with US buyout firm KKR & Co, and Carlyle Group LP.

The sale of Tescos Homeplus unit is the first large divestment by the British company as it tries to pay off its debt and reclaim its investment-grade rating after it was slashed to “junk” in January by S&P and Moodys following an accounting scandal and a continued market share loss.

The deal will be among the largest transactions in Asia this year and will allow the MBK-led group to enter South Koreas highly competitive retail sector. Homeplus is the countrys second-biggest discount store chain after Shinsegae’s E-Mart, with a market share of 25% closely trailing E-Mart’s 29% and well ahead of Lotte Mart with 16%. The unit operates more than 900 fully-owned and franchise stores that serve about six million customers per week, generating annual revenues of over $7 billion.

The transaction comes at a difficult time for South Korean big-box retailers which have suffered from sluggish domestic consumption and a legislation designed to protect smaller stores. Homeplus reported a net loss of KRW 300 billion ($254 million) for the fiscal year ended February 28th, compared to a profit of KRW 463 billion a year earlier, on the back of a 4% drop in revenue to KRW 8.6 trillion.

The deal would allow Tesco to bolster its balance sheet and focus on its home market where it has lost ground to German discounters Aldi and Lidl which have steadily been expanding across the UK. To turn around the chains performance, Chief Executive Dave Lewis has cut prices and the product lineup, closed unprofitable stores and put more staff on the shop floor. The company reported in April a full-year pre-tax loss of £6.38 billion and has total debt amounting to about £21.7 billion.