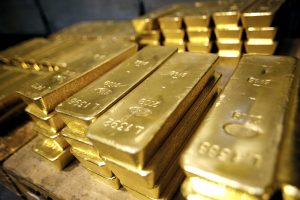 Gold slid on Tuesday amid speculations demand for the yellow metal will drop as China celebrates its Lunar New Year holiday, despite Europes failure to reach an agreement over Greeces debt.

Comex gold for delivery in April was down $4.9 from Fridays close of $1 227.1 at $1 222.2 per troy ounce at 8:26 GMT. Floor trading was suspended on Monday due to the Presidents’ Day holiday and transactions will be booked today for settlement purposes.

Physical buying in China has supported gold prices ahead of the Lunar New Year holiday as it is customary to exchange gold gifts during the celebrations, but demand for the metal is expected to slow down after the period ends.

The yellow metal was trading $3 to $4 higher than the global benchmark in Shanghai, outlining strong demand. However, Mondays spot volumes dropped 18% compared to last Friday.

“Some form of consolidation is expected to occur as Asian traders close out positions ahead of the long Chinese New Year holidays,” Howie Lee, an investment analyst at Phillip Futures Pte, wrote in a note, cited by Bloomberg. Mr. Lee also said he expect prices to range between $1 215 and $1 240.

Meanwhile, Eurogroup talks on Monday ended without success of hammering out a new bailout deal for Europes most indebted country. The political turmoil has provided a boost for gold prices as investors launched a wave of safe-heaven bids.

Greeces current deal is set to expire at the end of the month, leaving the country without further funding and possibly running out of money by March. Europes finance ministers met in Brussels in order to prevent that situation as it may lead to Greeces exit from the Eurozone.

Greek Finance Minister Yanis Varoufakis rebuffed a proposal by the Dutch Finance Minister Jeroen Dijsselbloem, who chaired the meeting, for Athens to ask for a six-month extension of its current deal.

Greece has previously said that it does not seek additional time and would rather have a new agreement. Mr. Varoufakis said that Europes officials did not offer the same agreement as the European Commission, which consisted of four to six months of credit for the country in exchange for a pause on its anti-austerity policies.

Athens was ready to ink the deal proposed by the European Commission, but described the deal from the Eurogroup as “unacceptable” and “highly problematic”. Mr. Dijsselbloem said Greece had until the end of the week to request an extension.

“Greece still has at least ten days to iron out a new bailout package, but until then, markets will continue to be kept on the edge of their seats.” Mr. Lee said.

Assets in the SPDR Gold Trust, the biggest bullion-backed ETF, remained at 768.26 tons on Friday. Changes in holdings typically move gold prices in the same direction.

A renewed strength in the dollar, spurred by the fall of the euro after negotiations broke down, pressured prices.

The US dollar index for settlement in March was up 0.25% at 94.510 at 08:26 GMT, holding in a daily range of 94.540-93.970. The US currency gauge closed unchanged on Monday. A stronger greenback makes dollar-denominated commodities pricier for holders of foreign currencies and curbs their appeal as an alternative investment.

According to Binary Tribune’s daily analysis, April gold’s central pivot point on the Comex stands at $1 228.2. If the contract breaks its first resistance level at $1 233.8, next barrier will be at $1 240.6. In case the second key resistance is broken, the precious metal may attempt to advance to $1 246.2.