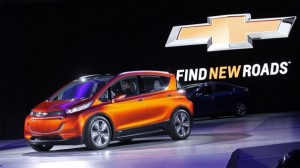 General Motors Co unveiled on Monday the concept of its new plug-in Chevrolet Bolt, marking the companys push into the electric vehicle market.

The vehicle is different for GMs Chevrolet Volt as it does not future a gasoline generator to extend travel range. The all-electric car has a 200-mile range on a single charge, a great improvement compared to the 38 miles its predecessor was able to go before switching to the gasoline generator.

The car is also expected to cost less compared to its older brother and hit the market within the next two years. In the US the Volt is sold for $34 335 after federal tax credit, while the Bolt is projected to be obtainable for $30 000.

The estimated price is also a lot lower that the current cheapest electric vehicle, the Model S. Teslas 208-mile range sedan released in June 2012 is selling in the US for $74 570 after tax incentives.

Although many analysis have argued that it would be hard for the carmaker to produce an all-electric vehicle that would be sold on such low price, GMs CEO Mary Barra described the Bolt as a “game-changer” and insisted that the company was serious about the vehicle.

Teslas Model S has been praised for its ability to almost immediately supply power to the wheels and its design being focused on providing lower center of gravity, improving the vehicles handling and acceleration.

According to Stuart Norris, GMs director of advanced design in Korea, the Bolt has the same characteristics.

Thin seats, aluminum parts, battery located closer to the ground, those are all features aimed at lowering overall weight and improving range and performance of the Bolt.

Electric cars are moving closer to gasoline vehicles in both price and performance, however, in 2014 plug-ins were responsible for less than 1% of all US automotive sales.

Plunging oil prices have widened the gap between the “zero-emission” vehicles and traditional ones, despite car companies projections of an increasing number of consumers interested in owning an all-electric vehicle.

According to CNN Money, the The 17 analysts offering 12-month price forecasts for GM have a median target of 42.00, with a high estimate of 53.00 and a low estimate of 27.00. The median estimate represents a 17.19% increase from the last close price.