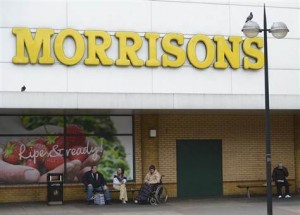 WM Morrison Supermarkets PLC narrowed its end-year outlook and said the company made progress in the quarter, despite another drop in sales.

Britains fourth-biggest supermarket chain by market share said that like-for-like sales at stores open at least a year dropped 6.3%, including a 0.7% contribution from its online business, in the three months ended November 2. In comparison, the company reported a 7.6% decline in like-for-like sales during Q2 of this year.

CEO Dalton Philips insisted that this is a step in the right direction and said: “We had a clear plan and we are delivering on it”. He also mentioned that price decreases reflected in 3% of the decline in like-for-like sales for the quarter and backed up the statement with an example where lower prices offset increase in volume.

The company reported that items per basket improved and were 2.4% down year-on-year, compared to a 6.9% decline in Q4 last fiscal year.

The company still faces competition from German discounters Lidl and Aldi, recent data from consumer research group Kantar Worldpanel showed, pointing out that in the four weeks to October 12 Morrison was the worst performing of the four biggest retailers in Britain.

In an effort to fight back, Morrison moved the start of its Christmas campaign from October to November to concentrate on the implementation of a “game-changing” price-matching strategy, employed last month, providing lower prices than German discounters or a customer refund.

Morrison changed its outlook for the future and said it expected underlying profit before tax to be in the range of £335 million to £365 million, narrowing down both ends by £10 million. Year-end net debt is now projected between £2.3 billion and £2.4 billion, £100 million better than its previous forecast and £400 million to £500 million lower than last year.

The company also said it would generate £2 billion in cash and £1 billion of cost savings over three years.

“Clearly narrowing that range is an indication of our confidence in our initiatives and the progress we are making” said Mr Philips.