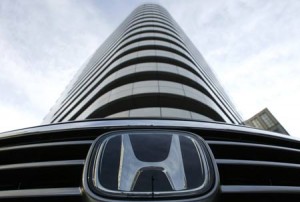 The third-biggest auto manufacturer on the territory of Japan, Honda Motor Co., posted its annual profit forecast for the year through in March 2015. The company said its profit is expected to fall by 1.6% to reach ¥565 billion ($5.2 billion).

Honda revised down its projection made in April, which forecast a profit of ¥600 billion. This would be the first full-year profit decline of the company in three years. The weakness of the domestic market led to the downward revision of the net profit projection. The consumption tax increased this year and made the business environment more complicated.

According to Hondas statement, its sales targets were also cut by 100 000 units to 800 000 this year, due to decreasing demand for key models such as the companys Accord sedan and CR-V sport utility vehicle.

Last week Honda issued its fifth vehicle withdrawals of its Fit hybrid model in only a year.

The Japanese company also said it expects to sell 4.62 million vehicles globally over the year that is to end in March 2015. Theese figures are about 4.3% lower than the previous forecast.

The Executive Vice-President of the company, Tetsuo Iwamura, noted in a statement, cited by the Financial Times: “Our sales opportunities have been delayed.”

Honda announced that its operating profit over the second fiscal quarter declined by 4.1% to ¥164.4 billion. Preliminary estimates pointed to a profit of ¥184.9 billion. The companys second-quarter sales increased by 4.3% to reach ¥3.01 trillion.

As reported by the Wall Street Journal, Tatsuo Yoshida, an analyst at Barclays, commented that while the companys quarterly results were “a bit of a disappointment”, the shortfall in sales also highlighted Hondas move to expand reach in marketing incentives in North America. He said: “The near term is going to be tough for them, but from a midterm to long-term perspective I’m still bullish on Honda.”