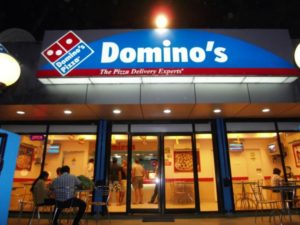 Dominos Pizza Inc reported on Tuesday that Q3 profit surpassed Wall Streets estimates, another better-than-expected performance, thanks to strong sales overseas and on home turf in the US, where competitors struggle.

The company has topped analysts predictions, which averaged 61 cents per share, according to Thomson Reuters I/B/E/S.

Pizza sales overall have stayed mostly flat, but Dominos has reported hefty results in the recent years and managed to gain ground over its competitors, after the company reworked its recipe with thicker crust and a new mix of cheeses in order to fend off rumors that its pies werent as good as its rivals.

In the U.S., sales at outlets open at least one year rose 7.7% in the third quarter. The company has been trying to expand in its home market, but has struggled due to higher costs and rough competition since the recession.

At the end of Q3 Dominos had 5 002 stores within the U.S. and 6 119 international outlets. During the recent quarter it opened 183 new locations, mainly overseas.