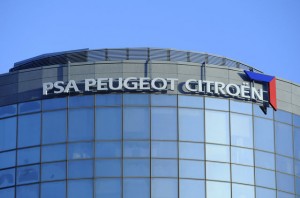 Peugeots shares jumped as much as 8.5%, the most in almost six months, after the company reported operating income of 477 million euros ($640 million), before one-time items, compared with a loss of 100 million euros for the same period a year ago. The figure was larger than the 358-million euro average analysts estimate.

The new turnaround plan of the company, announced by Chief Executive Officer Carlos Tavares, who took the helm earlier this year, is partly being financed by a stock sale that brought in the Chinese manufacturer Dongfeng Motor Corp. and the French state as investors with approximately 14% stake each. The founding family Peugeot also has a 14% holding in the company.

The turnaround plan included the shutdown of a plant near Paris last year, as well as reducing the the carmaker’s lineup to 26 models by 2022 from 45 vehicles now and transforming the upscale DS badge, which was originally part of Citroen unit, into a mature premium brand. The French car manufacturer, together with its Chinese partner Dongfeng, is also trying to expand outside the European market, where demand is slowly recovering from last years two-decade low.

“It’s a major boost for the credibility of their turnaround plan,” Jose Asumendi, a London-based analyst at JPMorgan Chase & Co. with an overweight recommendation on the shares, said in a Bloomberg phone interview. “This stock is going to go back on the radar of many portfolio managers.”

Free cash flow, a key indicator for a company that has spent over 3.4 billion euros in cash over the past two years, swung positive in the first half to 1.51 billion euros, compared with a 51 million fresh cash flow deficit a year ago.

“Rigorous control” of inventory (the company managed to reduce the number of vehicles sitting on dealer lots by 30 400), helped it improve working capital by more than 1 billion euros, Chief Financial Officer Jean-Baptiste de Chatillon told journalists on a conference call, cited by Bloomberg.

However, revenue declined 0.4% to 27.61 billion euros in the period as emerging-market currencies continued to slide against the euro, putting a 251 million euro gap in earnings.

“Uncertainty in emerging markets” and a sluggish recovery in auto demand at its home market are among “challenges and risks” in the second half, Peugeot said in its statement. The company, similarly to its home-based rival, Renault, forecast that Russian car sales may contract 10% this year, while sales in Latin America may fall up to 7%.