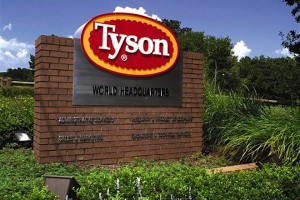 According to two people familiar with the process, Tyson Foods Inc., which is currently the biggest meat company in the U.S., reached an agreement to purchase Hillshire Brands Co. after beating the offer of Pilgrims Pride Corp. The people, who asked not to be named because the deal has not been officially announced yet, revealed that the agreement was reached over the weekend.

The head for agricultural equities for Allianz Global Investors – Br. Bryan Agbabian commented on the purchase in a Bloomberg telephone: “It makes a lot of financial sense to buy Hillshire now that they have low debt levels, they have very strong cash flow.”

According to people familiar with the situation, Tyson offered 63 dollars a share in cash, valuing Hillshire at about 7.7 billion dollars. The new offer of Tyson Food Inc. equals to about 70% premium to the price of Hillshire before the beginning of the bidding war.

The bidding between the two companies was due to each ones desire to gain control over consumer brands that would increase its profit margins and help it expand its reach to consolidate its positions. The acquisition of Hillshire would finally provide the company access to a business with branded meat products.

The spokesmen of Tyson Foods Inc. – Mr. Gary Mickelson and Mr. Dan Fogleman did not respond to reporters e-mails asking for comment. So did one of the Hillshires spokesmen – Mr. Mike Cummins.