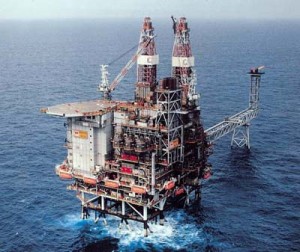 Both West Texas Intermediate and Brent crude benchmarks edged lower on Tuesday ahead of private and government data that may show an eleventh weekly build up in US crude oil inventories, while manufacturing figures from China spurred uncertainty over growth prospects in the worlds second-biggest economy and oil consumer. A possible dispersion of tension between Russia and the West also helped push prices down, coupled with an alleged rise in Libyan crude oil output.

Government data showed early on Tuesday that manufacturing activity in China matched projections and inched up to 50.3 in March, up from 50.2 in February. However, the minor expansion did not do much to brighten the economys growth prospects after a recent pile of downbeat data points.

Meanwhile, a separate private report based on a smaller sample size showed that factory activity in China contracted for a third month. The HSBC China Manufacturing PMI fell to 48.0, compared to analysts expectations for a drop to 48.1 from Februarys reading of 48.5.

The report showed that business conditions in Chinas manufacturing sector worsened for a third straight month in March and market the worst performance since July. The contraction was attributed to a drop in new orders, although new business from abroad expanded for the first time in four months. Companies cut their headcount and purchasing activity and both input and output prices slid by the most since August 2012.

Hongbin Qu, Chief Economist, China & Co-Head of Asian Economic Research at HSBC commented on the report: “The final reading of the HSBC China Manufacturing PMI in March confirmed the weakness of domestic demand conditions. This implies that 1Q GDP growth is likely to have fallen below the annual growth target of 7.5%. We expect Beijing to fine-tune policy sooner rather than later to stabilise growth.”

The market was also pressured amid expectations that US crude oil inventories rose for an 11th straight week in the seven days through March 28th. According to a Bloomberg survey of seven analysts ahead of government data tomorrow, US crude supplies likely jumped by 2.5 million barrels to 385 million, the highest level since November, on the back of higher imports. Refinery utilization likely rose last week.

Motor gasoline inventories are projected to have fallen by 2 million barrels, while distillate fuel inventories, which include diesel and heating oil, likely declined by 300 000 barrels.

The industry-funded American Petroleum Institute will release its separate report later today. APIs data however is deemed less reliable than EIAs numbers as they are based on voluntary information from operators of pipelines, refineries and bulk terminals, while the government requires reports to be filed with the EIA.

The energy complex was also pressured as a sign of a possible thaw in relations between Russia and the West calmed the markets. In a gesture that could defuse the built up tension surrounding Ukraine, Russian troops were partially withdrawn from the border to Ukraine before a NATO diplomatic meeting is held in Brussels today.

Last Wednesday, the US and the EU agreed to work on preparing possible tougher economic sanctions against Russia, including its energy sector, and also reduce Europe’s dependence on Russian energy exports. President Obama warned after a meeting with European leaders that Moscow’s isolation will deepen, if it continues its current course.

Obama said on Thursday in Rome that the US and its allies are closely studying Russia’s military, energy and finance sectors to determine which sanctions could have the most powerful impact, if a new round of penalties should be imposed. The US Senate and House of Representatives passed bills imposing additional sanctions on Russian officials with allegedly close ties to President Vladimir Putin.

Meanwhile, according to data compiled by Bloomberg, OPECs crude output fell by 117 000 barrels in March to an average 30.293 million barrels per day due to outages in Angola and Libya.

Libya, holder of Africas biggest crude reserves, produced less than 200 000 bpd last week as export terminals and oilfields remain blocked amid political turmoil, the 130 000-bpd El Feel field being the latest of which.

Oil prices may see further pressure as rebels in eastern Libya prepared to reopen three oil export terminals, which have been under their control since the summer, effectively releasing additional barrels in the global market.