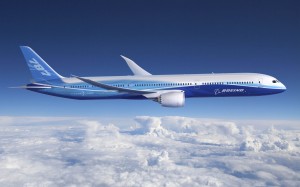 According to a company spokesman, Boeing is inspecting the wings of 43 undelivered jets of its 787 Dreamliner model after their supplier warned that a change in the manufacturing process may have led to the formation of hairline cracks, causing Boeing to further delay deliveries.

The plane manufacturer experienced major difficulties with its marquee jet, whose debut in 2011 came with a three-year delay, and the company has been struggling to maintain production this year at 10 jets per month. Boeing however announced that it still plans to produce about 110 Dreamliners in 2014 and its revenue forecast remains unchanged, although only 8 were delivered through February.

The wings producer, Mitsubishi Heavy Industries Ltd., said that a change in its manufacturing process may have caused the cracks and following inspections confirmed the defect was present on some of the airplanes.

However, Marc Birtel, a Boeing spokesman, said, cited by Bloomerg, that all the affected planes were still in production and the company is working towards correcting them. None of the already delivered 123 Dreamliners have been exposed to the manufacturing flaw, the company said, since Mitsubishi found out the issue in mid-February during routine quality checks. Boeing expects each aircraft will require one to two weeks to inspect and correct, depending on their stage of completion.

According to external sources tracking the program, cited by the Wall Street Journal, seventeen out of the 43 jets being inspected were fully completed, while seven were being tested prior to their delivery. The remaining Dreamliners were still being assembled, and some of their wings have not yet been shipped by Mitsubishi.

In 2013, Boeing delayed deliveries of the Dreamliner as the lithium-ion batteries on two of the aircrafts melted down, due to which global regulators grounded the whole fleet for three months until the issue was resolved. The plane maker accelerated production to 10 Dreamliners per month from seven at the end of 2013 in order to meet the high demand for its fuel-efficiency, which is expected to bring seventeen new customers in 2014, among which Air Canada and American Airlines Group.

Boeing assembles its Dreamliners in two factories – its main wide-body plant in Everett, Washington, and at a newer facility in Charleston, South Carolina. Dreamliners are the first commercial airplanes made mainly of spun composite fibers instead of aluminium.

Mitsubishi builds carbon fiber composite 787 wings at its factory in Nagoya, Japan, and delivers them to Boeings final assembly lines in its two factories. Japanese suppliers account for around 35% of the Dreamliners construction. The wing is well known for its 58-meter span and its 20% smaller weight compared to the traditional ones, due to the new materials used in it.

Peter Arment, a New York-based aerospace analyst with Sterne, Agee & Leach Inc., said, cited by Bloomberg: “This looks to be a one-off, but obviously it gets a lot of attention given the history of this program.” He said Boeings shares didnt mark any significant decline after the disclosure of the issue, because the company kept its production and revenue targets unchanged.

According to Boeings website, the company has delivered 122 of the 787s through February and still expects to deliver another 110 in 2014. Its revenue target remained unchanged at between $87.5 billion and $90.5 billion.