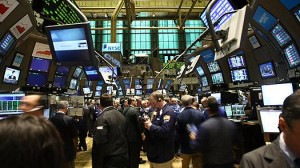 Stocks fell as investors awaited a statement from the Federal Reserve on whether to continue its efforts to support the U.S. economy.

“There are so many people watching the Fed’s decision, so much money on the edge, that the market is sort of just jumpy right now,” Sam Wardwell, an investment strategist at Pioneer Investments in Boston, said in a phone interview for Bloomberg. His firm manages about $225 billion. “Everybody knows the Fed is going to taper sooner or later. The question is, are people putting on too many short positions, or not enough short positions? This is everybody betting on the outcome so the market is going to be volatile.”

Data yesterday showed the cost of living in the U.S. was unchanged in November from a month earlier, showing inflation is making little progress toward the Federal Reserve’s goal. The improvement in the housing index was further evidence of the U.S. economic recovery,

In Washington, the U.S. Senate advanced the budget agreement to a final vote by tomorrow as Republicans were divided on their support for the measure. The Senate voted 67-33 to end debate on the $1.01 trillion U.S. spending plan. The measure passed the House on December 12 with almost equal numbers of Republicans and Democrats in support.

In U.S. corporate news, Tenet Healthcare slumped 1.9% to $39.86. Patient admissions declined 4% to 5% in November from last year, according to Citigroup’s monthly survey of 98 hospitals. A new two-midnight rule has hurt admissions and revenue, Citigroup said in a note.

Visa Inc. climbed 2.7% to $213.25, an all-time high. Concern that the world’s biggest bank-card network is losing position to MasterCard Inc. was overdone, James Friedman, an analyst at Susquehanna International Group, wrote in a note. MasterCard Inc. gained 0.2% to $797.95 to extend a record.

Boeing adde 0.9% to $135.88. The planemaker said it will buy back $10 billion. It also said the quarterly dividend would rise to 73 cents a share from 48.5 cents. Boeing has been reaping more cash as it accelerates production of some of its top-selling jetliners, including the single-aisle 737 and the wide-body 777 and 787 Dreamliner.

Facebook Inc. rose 2% to a record $54.86. The social-networking site is testing video advertisements that automatically play in users’ news feeds, seeking to catch up with other websites offering short commercials online. The first promotions are starting to run this week, the company said.

Hewlett-Packard Co. advanced 2% to $27.45. JPMorgan Chase & Co. raised its recommendation to “overweight” from “neutral”. The PC market appears to be stabilizing and the decline in printing demand may be easing, analyst Mark Moskowitz wrote in a note.