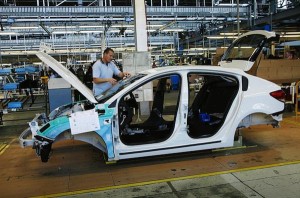 Last Wednesday General Motors Co. announced that it intends to close its Holden production facilities located in Australia by the end of 2017. This was quite an unexpected move that will result in the loss of thousands of jobs, which makes the companys future unstable. General Motors decision to end manufacturing by the end of 2017 is expected to lead to about 2,900 lost jobs in South Australia and Victoria. The company also announced that it intends to stop engine manufacturing in the country and will also considerably diminish its engineering operations in Australia.

Dan Akerson, who is the CEO of General Motors Co. explained this companys decision by the strength of the Australian dollar and also by the high production costs. He also called the auto market in the country “arguable the most competitive and fragmented auto market in the world.” In a statement, cited by CNN Money, Mr. Akerson also said: “The decision to end manufacturing in Australia reflects the perfect storm of negative influenced the automotive industry faces in the country.”

For years now the Holden brand was considered iconic to the country, which also made it a source of national pride. That is the reason why the withdrawal of General Market is expected to have a great impact on the Australian auto market. The acting prime minister of the country – Warren Truss – commented on this occasion on December the 11th: “this a difficult day for Australians, and a difficult day in particular for the Holden employees. Holden has been an iconic national brand for Australians – a part of our heritage. It was meant a great deal to Australians of several generations.”

Australias auto industry will also suffer a great blow by General Motors decision, because the market has suffered during the last few years, especially after some manufacturers such as Mitsubishi and Ford have also withdrawn from the country. Some analysts are concerned that this trend could soon be followed by Toyota, which is also considered as one of the pillars of the Australias auto industry.

Still, General Motors Co. announced that the company will keep a national parts distribution centre and a global design studio in Australia. Its decision concerning reducing the companys operations in the country is expected to lead to a severe change in the “pre-tax charges” from 400 million dollars to 600 million dollars in the last quarter of 2013. additional charges are also expected through 2017.