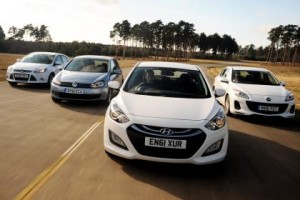 The largest foreign auto makers have recently started a fierce competition after three years of seizing market share from Chinese rivals. The goal of highest priority for Ford Motor Co., Volkswagen AG and Hyundai Motor Co. is to record significant market-share gains on the Chinese auto market, the largest one in the world. All three companies are rushing to meet the Chinese customers’ demand for sport-utility vehicles and new tailor-made models.

A great part of the benefits of Ford Motor Co, Volkswagen AG an Hyundai Motor Co. are at the expense of other foreign auto makers, such as General Motors Co., Toyota Motor Corp. and Nissan Motor Co. Their sales, and respectively, share price have dropped severely during 2013.

That is exactly the reason why foreign auto makers are hitting on the average Chinese drivers, who prefer more “considerate” and comfortable designs. The sales of passenger vehicles went 15% up during the first nine months of 2013. From January to November, the overall market share of foreign auto makers rose by 1.3% from a year earlier to 60%.

Even the auto makers with flat or declining market share record increasing sales on the Chinese market, which leads to increasing the pressure between the rivals. Mr. Bob Socia, who is the President of General Motors in China said in October this year: “It is totally about having the right product”, which once again proves the competitive environment in which the auto makers are placed. This rightfully puts a bit extra pressure on both the manufacturers and the customers, who are forced to make their choice among a great variety of vehicles.

The greater demand rightfully makes the companies invest additional money on developing more successful marketing strategies in order to gain higher profits. More than 1.6 billion dollars were spent by the five largest joint ventures on advertising from January to October this year, which is 8% more than the money spent in 2012.

All of the leading companies are now entering a battle over the Chinese auto market, which as we have mentioned before, is the largest one worldwide. They all choose different strategies and develop more innovative and competitive models in order to meet the customers’ demand and make larger profits. The companies are also driven from the fact that the auto culture in China is far from being established, which makes the competition even more fierce.