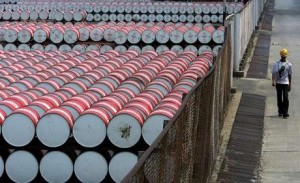 West Texas Intermediate crude remained firmly near the $97 mark after the Energy Information Administration reported a much-larger-than-expected decline in US crude inventories in the seven days through November 29, while gasoline and distillate fuel supplies rose. The market continued to draw support after TransCanada Corp. said that an extension of its Keystone XL pipeline will become operational on January 3, relieving a supply bottleneck at Cushing, Oklahoma.

On the New York Mercantile Exchange, WTI crude for delivery in January rose by 0.91% to $96.91 per barrel by 15:38 GMT. Prices shifted in a range between a five-week high of $97.52 and days low of $96.09 a barrel. The US benchmark rose by 3.2% on Tuesday, the most since September, and extended its weekly advance to over $4.4% following Wednesday’s follow-through.

WTI continued to edge higher after the Energy Information Administration reported that U.S. crude oil inventories fell last week, snapping 10 straight weekly gains which added nearly 36 million barrels. Supplies fell by 5.6 million barrels in the seven days through November 29, exceeding more than ten times the median estimate of analysts surveyed by Bloomberg. At 385.8 million, inventories were well above the upper limit of the average range for this time of the year.

The report also showed that refinery utilization picked up in the seven days to November 29, suggesting supplies will most likely decline further in the upcoming weeks. Refineries operated at 92.4% of their operable capacity, up from 89.4% a week earlier, and exceeded analysts expectations. Gasoline production fell last week, while distillate fuel output increased, averaging 9.0 and 5.1 million barrels per day, respectively.

Motor gasoline inventories rose by 1.8 million barrels, underperforminng expectations for a 1.3 million jump, and remained in the upper half of the average range for this time of the year. Distillate fuel stockpiles, which include distillates and heating oil, rose by 2.6 million barrels, confounding projections for a 1.5 million drop, but remained below the lower limit of the average range.

Prices continued to draw strong support throughout the day after Calgary-based TransCanada Corp. said it will begin utilizing the southern segment of its Keystone XL pipeline on January 3. This will allow rising inventories at Cushing, Oklahoma, the biggest U.S. storage hub and delivery point for NYMEX-traded contracts, to move to Port Arthur, Texas. A large part of the country’s refining capacity is based on the Gulf Coast.

Gordon Kwan, the regional head of oil and gas research at Nomura Holdings Inc. in Hong Kong, said for Bloomberg: “Further de-bottlenecking at Cushing with the Keystone pipeline extension to Port Arthur could boost WTI and narrow the wide discount.”