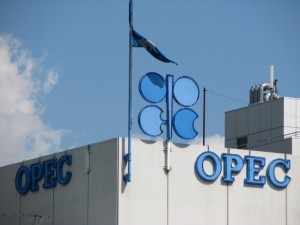 West Texas Intermediate crude hovered near 6-month lows and is set for a third monthly decline, the longest losing streak in almost five years, after U.S. inventories rose for a tenth consecutive week as output exceeded 8 million barrels per day for the first time in nearly 25 years. Also weighing on the oil market, OPEC is set to boost its exports in the four weeks through December 14, coupled with expectations for the group to reaffirm its 30-million-bpd production target at its December 4 meeting. Prices however drew support on ongoing turmoil in Libya after more than 40 people died in an explosion at an army depot.

West Texas Intermediate crude continued to edge lower after EIAs weekly report showed on Wednesday that U.S. crude oil inventories jumped for a tenth consecutive week in the seven days through November 22 as domestic output surged to the highest in 25 years.

Crude inventories rose by 3 million barrels last week, exceeding the median estimate of 11 analysts surveyed by Bloomberg for a 750 000 barrels increase. At 391.4 million barrels, inventories were at the highest level since June and above the upper limit of the average range for this time of the year.

Stockpiles at Cushing, Oklahoma, the biggest U.S. storage hub and delivery point for NYMEX-traded contracts, rose by 676 000 barrels to 40.6 million, the highest level since July.

U.S. crude production surged by 45 000 bpd to 8.02 million bpd, reaching the highest level in almost 25 years. Increasing U.S. self-sustainability resulted in declining imports. Inbound shipments were at 7.7 million barrels per day last week, down 145 000 bpd from the preceding period. Imports averaged 7.7 million bpd over the last four weeks and were 3.5% below the same period a year earlier.

Ric Spooner, a chief market analyst at CMC Markets in Sydney, said for Bloomberg: “When supply capacity exceeds demand growth, that will put ongoing downward pressure on prices. The U.S. is dancing to the tune of its own supply situation. There’s big inventories and plenty of supply capacity.”

Also fanning negative sentiment, 18 out of 20 analysts and traders surveyed by Bloomberg expected OPEC to reaffirm its production target of 30 million bpd at its next meeting on December 4. The group pumped 30.62 million barrels per day in October, slightly up from September’s 30.58 million bpd.

Meanwhile, OPEC is expected to raise its crude exports by 700 000 barrels per day to 24.05 million in the four weeks to December 14, according to Oil Movements, a Halifax, England-based tanker tracker.

However, if prices were to fall too much, as in Brent plunges to around $85 per barrel, the group may reduce its output in order to defend prices of around $100 as many exporters target that level to support their budgets.

Tony Nunan, oil risk manager at Mitsubishi Corp in Tokyo, said for CNBC: “Saudi Arabia has been pumping very high volumes to keep the market well supplied. They can easily reduce output by 1 million barrels per day if prices start to fall too low.”

The oil market, and especially the Brent benchmark, remained supported after recurring protests and clashes in Libya, the holder of Africas biggest crude reserves, kept output and export levels at a fraction of their capacity.

The latest event in a series of accidents led to the death of more than 40 people who were killed in an explosion at an army depot in southern Libya after locals tried to steal ammunition. Libyan oil workers are currently negotiating with armed protesters to reopen the second largest-terminal in the east amid ongoing frustration against militias controlling parts of the country.

Libya’s Prime Minister Ali Zeidan said earlier in the week the government may not be able to pay civil servants’ salaries and may have to seek loans if militias continue to block oilfields and export terminals, crippling the nation’s production and exports, its main source if revenues.

Libyan civil servants, oil workers and private sector employees went on a strike in the port city of Benghazi on Tuesday, protesting against insufficient security after clashes between the Libyan army and armed militants in Benghazi on Monday resulted in the death of at least nine people.

Prices however remained under pressure after Iranian diplomats and their counterparts from six world powers struck a groundbreaking diplomatic agreement on Sunday on curbing the Islamic republic’s nuclear program in exchange for a relief in tough economic sanctions, including easing the trade in oil with the country’s six remaining trade partners. Investors however did not expect any additional barrels of Iranian oil to enter the global market immediately, which limited the impact on pricing.

“Libya looks like it is getting worse,” said Nunan. “The recent agreement with Iran resolves some issues like shipping insurance. Exports wont jump but we could see some small increases.”