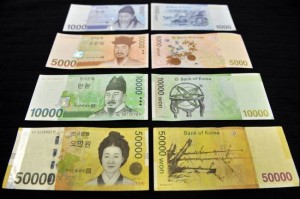 The South Korean won ontinued its downward trend, after having touched a two-week low on Wednesday on concerns that South Korean exporters were losing competitiveness against Japanese rivals as the yen drops. Government bonds also fell.

Yesterday, Bank of Korea announced that a weaker yen may hurt the profitability of some exports. The South Korean won advanced 7.6 percent against the US dollar since the end of June, which is the most in Asia.

South Korea, the fourth largest Asian economy, slowed its exports to 3% in November, compared to 7.2% in October, according to the median forecast of economists surveyed before data due out on December 1st. Export accounts for about 50% of South Koreas economy.

Chung Soon Won, Bank of Korea board member, told on Thursday in an interview in Seoul, cited by Bloomberg that South Koreans economy was improving.