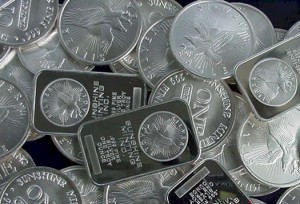 Silver fell for a third consecutive day on Thursday and erased its weekly advance on renewed speculations for an earlier-than-expected Fed tapering following this weeks overall upbeat U.S. data points. Prices varied in a narrow range throughout the day as trading conditions remained subdued with markets in the U.S. set to remain closed on Thursday due to the Thanksgiving holiday. A weaker dollar limited losses.

On the Comex division of the New York Mercantile Exchange, silver futures for settlement in March fell by 0.75% to $19.743 per troy ounce by 13:39 GMT. Prices plunged to a days low of $19.653 an ounce, the weakest level since August 7, while session high stood at $19.807 an ounce. The precious metal lost 1% on Wednesday but plunged back to negative weekly territory on Thursday, down 0.5% on the week.

Silver fell following a series of overall positive key U.S. data points, despite some signs of weakness. The Labor Department reported that the number of Americans who filed for initial unemployment benefits fell by 10 000 to a two-month low of 316 000 in the week ended November 23, defying analysts’ projections for an increase to 330 000. Applications for the previous week were revised up by 3 000 after being initially estimated at 323 000.

The four-week moving average, which smooths out weekly volatility, fell by 7 500 to 331 750, indicating a steady improvement in the U.S. labor market. The insured unemployment rate, which includes the jobless people eligible for aid, fell to 2.1% in the week ended November 16, down from 2.2% in the previous period.

The number of people who continued to receive unemployment benefits slid by 91 000 to 2.776 million, the lowest since January 2008, sharply outperforming analysts’ expectations for a 14 000 drop.

The metal was further pressured after a private report showed rising consumer confidence, backing the case for an earlier-than-expected Fed tapering. The Thomson Reuters/University of Michigan final index of consumer sentiment jumped to 75.1 in November after plunging to an eight-month low of 72.0 in October. Analysts expected a moderate rebound to 73.5.

Separate data showed manufacturing activity in the Chicago region eased from a month earlier but remained firmly in the expansion zone. The Chicago Purchasing Managers’ Index fell to 63.0 in November from 65.9 a month earlier, but outperformed expectations for a drop to 60.5. Readings above the neutral level of 50 indicate advancing activity in the respective sector.

Better-than-projected economic data reinforces investors speculations that the Federal Reserve might commence scaling back its $85-billion-per-month bond purchasing program, reducing the amount of dollars injected into the U.S. economy and limiting demand for raw materials. An exit from the stimulus program would strengthen the greenback and limit the appeal of dollar-denominated commodities as an alternative investment. Silver has fallen by 35% so far this year after the Federal Reserve announced it will likely roll back its quantitative easing program in the near future as key indicators signaled the U.S. economic recovery proved sustainable.

However, a worse-than-expected reading of Octobers durable goods orders was the only flaw of yesterdays string of U.S. economic points. The Department of Commerces Census Bureau reported that orders for U.S. durable goods fell in October, coinciding with recent reports which suggested confidence in the U.S. was hurt last month by the 16-day government shutdown. Bookings for goods set to last at least three years fell by 2.0% in October as demand for civilian and defense aircraft plunged, marking a major retreat from September’s upward-revised 4.1% advance. Analysts expected a 1.9% contraction.

Demand for non-defense capital goods orders ex aircraft, a gauge for future business investment in computers and other equipment, fell by 1.2% in October after they retreated by 1.4% in September, suggesting economic growth may slow in the fourth quarter.

A weaker dollar also eased pressure on the metal. The U.S. dollar index, which measures the greenback’s performance against a basket of six major peers, traded at 80.61 at 13:31 GMT, down 0.15% on the day. The December contract varied between day’s high and session low of 80.76 and 80.56. The U.S. currency gauge jumped 0.1% on Wednesday but plunged to negative weekly territory following Thursday’s decline.