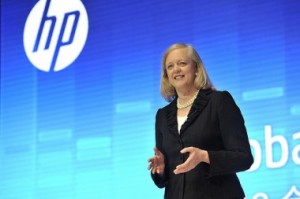 Investors, who had been worried that Hewlett-Packard would follow IBM, and disappoint in the last quarter, were surprised that HP had already included weakness in China and had performed well in other emerging markets.

Shares in Hewlett-Packard jumped as much as 8% in after-hours trading on Tuesday after the technology company reported earnings at the higher end of its forecasts, despite worries about a unsteady corporate IT market. HP reported quarterly revenue of $29.1 billion, soundly beating Wall Street analysts expectations. The company reported earnings per share of $1.01 for investors, also better than analysts had forecast.

Meg Whitman, chief executive, ended the financial year with a positive hint. She said she felt good about the company’s progress and said the success of the turnaround efforts would become clearer next year. However, HP warned progress would not be linear and there would still be “not so good quarters”.

HP is almost at the halfway point in the five-year turnaround plan engineered by Ms Whitman. The former eBay chief executive was charged with returning the old leader of Silicon Valley back to growth. The company had suffered from the decline in the PC market as consumers turned to tablets.

The tech company has been struggling with industry transition from pc desktops to mobile devices. Concerns about difficulties became even more apparent in September, when HP was dropped from the Dow Jones Industrial Average. It became the first to be replaced from the group that joined the DJIA in 1997, which includes Wal-Mart, Travelers and Johnson & Johnson.

“Overall, Im pleased with the progress weve made. But we still have a a lot of work to do,” Whitman said during the earnings call with analysts on Tuesday

At an analyst meeting last month, CEO Whitman said falling sales should stabilize next year. She said the next financial year would be crucial in HP’s path to a growth rate of 3-4%.

Whitman also said HP would concentrate on lowering prices to attract customer base as well as improved profitability. That may mean company is going to continue cuts adding several thousand more in the next 12 months.

Investors closely follow HP news, as the tech company is largely exposed in the consumer and business worlds, and its considered a good indicator of the global economy.