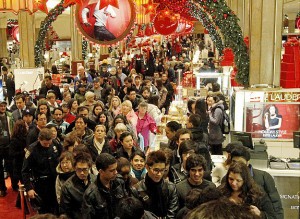 US shoppers would be flooding the malls in a hunt for Black Friday bargains this week, but there is a chance theyll be witnessing pricing theater.

As each year stores are advertising deep discounts aimed at drawing customers into stores, retail-industry experts acknowledge that, in many cases, offered deals will be a carefully thought illusion. A common believe is that retailers devalue stock that is not selling, or consciously taking a hit to their profits to advertise their stores or tie down customer with more paid services. However, that isnt always the case. Instead, big retailers work close with their suppliers to set starting prices which include a future mark down. This way companies and their suppliers dont have to discuss lower prices and get to keep their margins high while creating an illusion that a certain product has more value than it really does.

Does that work for buyers? In fact, they dont seem to mind because what they are after, especially in such economy conditions, is the feeling they got a real bargain.

“I dont even get excited unless its 40% off,” said Lourdes Torress, a 44-year-old technical designer, as she browsed the sale racks at Macys Inc.s flagship store in New York on a recent afternoon.

Maybe thats one of the leading reasons more customers start to shop online waiting for the so-called Cyber Monday. By logging online from a mobile device or desktop computer buyers have an opportunity to quickly compare prices and escape from the hype of “40% off signs”.

“I used to look at Black Friday deals and see what was happening, but after this year I know I can get deals all the time, so I’m no longer concerned.” said Cristin Zweig, a 29-year-old communications manager at Trulia Inc. “If you get 15% more off if you buy through your mobile app, that’s a bigger incentive for me.”

The gross margins of the retailers, (the difference between what they paid for goods and the price at which they sold them) were flat at 27.9%, according to FactSet. The holidays barely affected profits, with margins dipping to 27.8% in the fourth quarter of 2012 from 28% in the third quarter of that year.

“A lot of the discount is already priced into the product. Thats why you see much more stable margins,” said to Wall Street Journal, Liz Dunn, an analyst with Macquarie Equities Research

Another tactic used by retailers involves raising selling prices ahead of the holidays. Shortly after, the product is discounted compensating the previous raise and creating the impression of a real discount while it has never sold at the bigger price.

In a survey conducted by Market Track LLC in November 2012, online prices climbed an average of 8% in the weeks leading up to Thanksgiving for 366,out of 1,743 products. Later, the items were then discounted on Black Friday. Toys and tools had the biggest pre-Black Friday price increases of about 23%.

Retailers including Best Buy Co., Wal-Mart Stores Inc., Amazon are warning this will be an unusually competitive holiday season and that all the deals could hurt margins. In case when chains have to fight hard for sales, pile up excess inventory and have to take heavier-than-planned markdowns, that could be a reality. Most deals, however, are planned to be profitable.