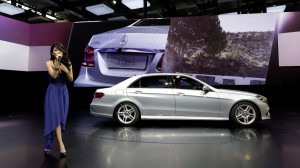 Mercedez-Benz announced a shift of China operations last December as a part of companys strategy to improve sales. The reorganization has included naming a new China chief who sits on the management board, adding dozens of dealerships, opening an engine factory in the country and merging competing sales organizations.

“Mercedes is on the right track in China,” said for Bloomberg, Frank Biller, a Stuttgart, Germany-based analyst at LBBW. “Sales have picked up since June and they seem to be gaining ground.”

The overhaul delivered great results as 10-month China deliveries at Mercedes increased 8%, compared with growth of just 1.5% last year. The revamp will get a further boost today when Daimler AG, Mercedes’s parent, completes the purchase of a 12% stake in joint-venture partner Beijing Automotive Group Co., according to Xu Heyi, chairman of the Chinese automaker.

Daimler announced plans last year to gather sales into one entity owned by Daimler and BAIC. As part of the deal between the two partners, BAIC will increase ownership in the production joint venture to 51% from 50%, and Daimler will raise its stake in the integrated sales partnership by 1% to 51%.

“The strategic investment proves our long-term commitment to China and our partner,” Dieter Zetsche, Daimlers chairman of the board of management and head of its Mercedes-Benz Cars unit, said in a statement.

The agreement has the approval of Chinas central government, Daimler said.

Company growth in China is crucial to Chief Executive Officer Dieter Zetsche’s target to surpass Bayerische Motoren Werke AG and Volkswagen’s Audi in global deliveries by the end of the decade. Success in the region was hampered in the past by separate sales organizations for imported and locally produced cars, which led to price cuts as the two competed with one another for customers.

Daimler is investing long-term by increasing production in the country and boosting its dealer network. The company is ready to open 75 new outlets in China this year, Chief Financial Officer Bodo Uebber said last month. The expansion will continue with another 50 dealerships added annually in the next two years.

In August, the automaker said it will invest 2 billion euros ($2.71 billion) in the next 2 years. The target is doubling local production to more than 200,000 vehicles. The manufacturer yesterday opened its first engine plant outside Germany in China. The factory, built at a cost of 400 million euros, will have an initial capacity to assemble 250,000 motors.