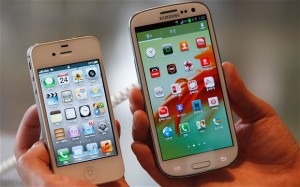 Samsung sold almost three times as many smartphones as rival Apple in the third quarter, according to Gartner research firm, reflecting the South Korean tech giants growing dominance in the increasingly competitive industry.

Worldwide, the Korean-based company sold 80,357 smartphones to users, during the three month period from July to September, compared with just 30,330 Apple handsets data released from the research firm showed.

Meanwhile, Motorola Mobility, the phone-maker owned by Google, has launched a low-priced smartphone designed to appeal to cost-conscious consumers in both developed and emerging markets. The Moto G will cost $179 or less without a contract in the US, and will offer most of the features found on much more expensive handsets. It will be available in most countries in Latin America which is a strong market for the Motorola brand along with several European countries including the UK, and will eventually be available in 30 countries except China.

“We think the Moto G will broaden the market for smartphones,” said Dennis Woodside, Motorola’s chief executive, who argues that most smartphone makers have ignored the 5 billion people globally who currently do not own a smartphone and who cannot afford to pay to $600 or more for most high-end smartphones including Apple’s iPhone and Samsung’s Galaxy family of devices.

In order to save from costs, the Moto G has a smaller screen than Motorola’s flagship Moto X, launched a few months ago, uses a less-expensive display technology, and is manufactured in Asia.

It also lacks support for the latest LTE networks, however Mr Woodside emphasized that unlike some low-cost smartphones, the Moto G runs the latest version of Google’s Android operating system, includes features like a front facing camera and “delivers the complete Android experience,” including the ability to download apps from the Google Play store.

Some smartphone makers such as Apple have avoided offering high quality, lower cost handsets capable of appealing to buyers in developing markets, mainly because of their concerns about the risk of eating off the sales of more expensive models and also profit margins opportunities on cheaper phones are much fewer.