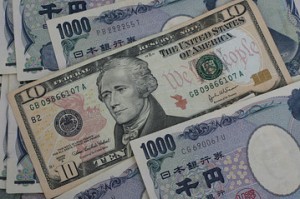 US dollar traded higher against the Japanese yen on Thursday, after a report revealed that Japanese economic growth slowed down during the third quarter of the year, which suggested that the current scale of monetary stimulus may be kept or even may be increased.

Japanese preliminary Gross Domestic Product, the widest indicator for economic activity, rose 0.5% during the third quarter of the year, compared to the preceding quarter, after a 0.9% gain in Q2, while experts had anticipated that the GDP will expand 0.4% in Q3. The annualized GDP figure, however, grew 1.9% in Q3, slowing down the pace in comparison with the 3.8% gain recorded in the second quarter and the 4.3% gain recorded during the first three months of the year. Fading demand for energy products abroad, accompanied by weak domestic demand, have probably obstructed growth.

The GDP deflator, which gauges inflationary pressure in the country, decreased 0.3% during the third quarter compared to Q2, after dropping another 0.5% during the second three months of the year.

“I expect the yen-weakness trend to continue,” said Marito Ueda, the senior managing director at FX Prime Corp., a currency-margin company in Tokyo, cited by Bloomberg News. “There’s a good chance additional monetary easing will be introduced early next year” by the Bank of Japan.

In addition, the index, gauging industrial output in Japan, climbed 1.3% in September compared to August, below expectations of a 1.5% gain, after a month ago production rose 1.5%. The annualized index of industrial production advanced 5.1% in September, following a 5.4% climb in August.

Another factor to suppress demand for safe haven currencies, such as the yen, was the 1.3% climb of the MSCI Asia Pacific Index of shares.

Meanwhile, in a statement released on Wednesday, Federal Reserve Chairman nominee Janet Yellen said, that US labor market and economy as a whole were “performing far short of their potential”. According to Yellen, economy has demonstrated a certain progress, but the rate of unemployment in the country still remains “too high”.

“A strong recovery will ultimately enable the Fed to reduce its monetary accommodation and reliance on unconventional policy tools such as asset purchases,” Yellen said in testimony prepared for her nomination hearing on Thursday before the Senate Banking Committee. “I believe that supporting the recovery today is the surest path to returning to a more normal approach to monetary policy.”

These remarks boosted market expectations that the central bank may continue its stimulus program in order to navigate US economy towards a stable growth. If approved by the Senate, Yellen will be the first lady to govern the Federal Reserve Bank in institutions 100-year history.