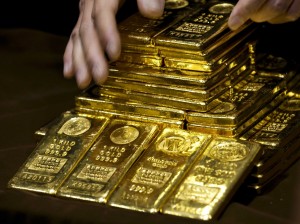 Also fanning positive sentiment, the Labor Department reported that more people than expected applied for initial unemployment benefits last week. Initial jobless claims fell to 339 000 in the week ended November 9, underperforming expectations for a drop to 330 000. Applications for the preceding week received an upward revision to 341 000 from initially estimated at 336 000, showing that the U.S. labor market was not moving straightforward in the right direction. The four-week average of claims, which irons out weekly volatility, dropped by 5 750 to 344 000.

The number of Americans who continued to receive jobless benefits was unchanged at 2.874 million in the week ended November 2, confounding expectations for a drop to 2.870 million. This number does not include the job seekers who have exhausted their traditional aid and are receiving extended payments under federal programs. Those people fell by 37 000 to 1.33 million in the week ended October 26.

The slow recovery of the labor market was largely based on dim consumer demand. Companies, which have been running a lean structure since the recession hit, are maintaining their work force in order to meet any rise in demand as the economy struggles to pick up. Many employers lost confidence after political wrangling in Washington closed the federal government for 16 days in October.

A slower-than-expected consumer spending, which accounts for 70% of the economy, continued to put a lid on activity and job opening. The Commerce Department reported last Friday that Personal Consumption Expenditures grew by 1.5% in the third quarter, underperforming expectations for a 1.6% rise following the preceding period’s 1.8% advance. Meanwhile, at 1.4%, core consumer spending advanced at a faster pace than the second quarter’s 0.6% but trailed expectations for a surge by 1.5%.

Data by the Labor Department also showed that Americans were more productive in the third quarter, compared to the preceding one. U.S. non-farm productivity rose by 1.9% but trailed expectations for a 2.2% advance. The preceding three months reading was revised down to 1.8% from initially calculated at 2.3%. The government agency also said that unit labor costs fell by 0.6% in the third quarter, underperforming an anticipated 0.1% decline. Expenditures for the three months through June were revised up to 0.5%.

A separate report by the Commerce Department showed the U.S. trade deficit widened further in September as imports rose to the highest in a year. U.S. exports fell by 0.2% to $188.9 billion in September, a third consecutive monthly decline, while inbound shipments jumped by 1.2% to $230.7 billion, the highest since November 2012.

As a result, the U.S. trade gap widened by 8.0% to $41.778 billion, defying expectations to narrow to $38.700 billion. Augusts reading was revised down to $38.701 billion from $38.803 billion. The increase of imports, coupled with slow consumer spending, could leave some of the imported goods piling up in warehouses, which would discourage the business to further restock and cut fourth-quarter economic growth.

Gold remained supported throughout the day after Fed Vice Chairwoman Janet Yellen said she thinks the central bank has more work to do to aid the economy, backing the current pace of Fed’s monthly bond purchases.

“Our country has come a long way since the dark days of the financial crisis, but we have farther to go. Likewise, I believe the Federal Reserve has made significant progress toward its goals, but has more work to do,” Yellen said.

She called last month’s 7.3% unemployment rate too high, noting the economy and labor market were performing short of their potential, while inflation remained well below Fed’s 2% target and provided room for easy money supply. Yellen will be holding a Senate committee hearing at 15:00 GMT on Thursday and will provide further information regarding Fed’s tapering timetable.

Earlier in the week, Federal Reserve Bank of Atlanta President Dennis Lockhart said in a statement he wouldn’t rule out a so-called tapering of Fed’s quantitative easing program at FOMC’s December 17-18 policy meeting. However, he added that inflation remained low and would want to see it moving toward the 2% target. He called for “continued strong stimulus” and said the central bank wants to see economic growth reach 3% or more, a faster pace than its long-term trend.

Meanwhile, Federal Reserve Bank of Minneapolis Narayana Kocherlakota shared Lockhart’s opinion and spoke even more strongly on the need for monetary stimulus. He said the central bank should continue with its aggressive action and not scale back the program to safeguard the economy and ensure its recovery. The Federal Reserve should do “whatever it takes” to bring the economy back to full employment quickly, he said.