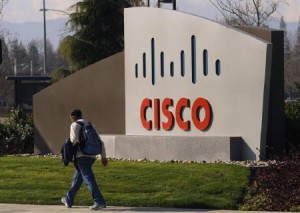 Many large businesses and government agencies are buyers of Cisco networking equipment, and the companys global reach makes it a closely watched indicator for the worlds economy.

Cisco Systems warned its revenues could retreat more than 10% in the current quarter, evoking concerns that the US networking equipment company is stepping backwards amid big technology transitions in some of its markets. The forecast came as surprise to Wall Street analysts who had been estimating growth of 6%, instead, Cisco shares fell 10% in after-market trading on Wednesday.

Cisco CEO John Chambers has been warning of an “inconsistent” global recovery for the past few months as on Wednesday he warned his company will continue to take a hit from it in the current quarter.

New orders fell 12% in the developing world, with Brazil down 25% and Russia off 30%, a sharp reversal from the 8% jump experienced in the preceding three months.

Chief executive Chambers contributed the decline in demand to customers in emerging markets and suggested a range of technology companies were likely to be similarly affected.

For the first quarter, Ciscos sales of $12.1 billion disappointed estimates from analysts polled by Thomson Reuters. That initially sent shares down 3%, although earnings of 53 cents a share topped expectations. For the current quarter, Cisco said it expects to earn 45 to 47 cents a share, and for sales to decline 8% to 10% on an annual basis. Thats drastically lower than the earnings of 52 cents a share and a 4% sales gain analysts were expecting.

Chambers claimed that the company was on track to have a strong line-up of new products on sale by the middle of next year. The weakness in demand from the developing world has continued into November, Mr Chambers said, adding: “I have never seen that fast a move in emerging markets.”

However Mr. Chambers acknowledged that the company was facing weaker sales in its core switching and routing markets as it went through important product transitions, raising fears that it was losing ground in its most profitable products.

“There is no doubt the pace of change we all see and feel is accelerating,” Mr Chambers said. “This is the new market reality.”

Shares of Cisco are expected to retreat in todays trading session. However, the 32 analysts polled by CNN Money offering 12-month price forecasts for Cisco Systems Inc have a median target of 28.00, with a high estimate of 32.00 and a low estimate of 16.00. The median estimate represents a 16.69% increase from the last price of 24.00.