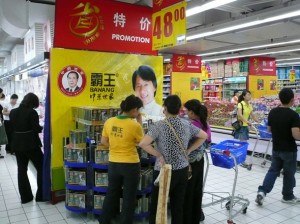 Chinese consumer prices rose by the most in eight months in October, led by gains in food prices, and added to recently arisen concerns the Peoples Bank of China may tighten monetary conditions. Although annual consumer inflation remained below the governments official target of 3.5% throughout the year, recent upbeat economic data and gradual acceleration of prices fanned optimism Chinas economic growth target is achievable while the government attempts to reform the economy from investment-driven to based on domestic consumption.

The National Bureau of Statistics reported on Saturday that consumer prices jumped by an annualized 3.2% in October, slightly up from Septembers 3.1% advance. Despite trailing the median estimate of analysts surveyed by both Reuters and Bloomberg for a 3.3% surge, last months reading matched Februarys 10-month high. On a monthly basis, Chinas Consumer Price Index barely inched up by 0.1%, underperforming projections for a 0.2% and Septembers 0.8% gain.

Octobers consumer inflation advance was based on rising food prices which marked a 6.5% increase, the most since April 2012, following a 6.1% jump in September. Non-food costs remained unchanged at 1.6% from a month earlier. Transportation and communications prices declined by 0.6%, the most in four months.

Li Huiyong, an economist at Shenyin & Wanguo Securities in Shanghai, commented for Reuters: “Although the CPI inflation was mainly pushed up by seasonal food demand, it may fuel market concerns that the central bank may tighten monetary conditions.”

The Peoples Bank of China refused to inject money into the market on a separate occasion in October after housing prices in major cities surged, which spurred concern over monetary tightening and pressured down raw materials. The central bank again refused to inject liquidity during regular open market operations on Thursday, which further fueled concern over tightening in the next few months.

But those worries were not broadly shared as inflation has remained below the official government target of 3.5% throughout the year. Officials said the PBOC will keep its reasonable policy-setting with timely fine-tuning to safeguard Chinas economic growth while keeping inflationary risks in check.

Qu Hongbin, chief China economist at HSBC Holdings Plc in Hong Kong, commented for Bloomberg: “Both CPI inflation and economic growth still remain within Beijing policy makers’ comfort zone. While there’s no need for either easing or tightening in the coming months, the central bank will have to use its tools to keep liquidity stable as money inflows keep rising.”

Chinas statistics agency also reported on Saturday that retail sales rose by 13.3% in October, the same as in September, but trailed expectations for a 13.4% advance. Fixed-asset investment, a key driver for economic growth, matched expectations for a jump by 20.1% in the ten months through October, but were slightly lower than last years 20.2% increase during the comparable period.

Adding to the expectations the PBOC will refrain from introducing major policy changes, the National Bureau of Statistics reported that producer prices further decelerated for a 20th consecutive month in October, the longest stretch since 2002. Year-on-year, Chinas Producer Price Index fell by 1.5%, underperforming expectations for a drop by 1.4% from Septembers 1.3% decline. On a monthly basis, producer inflation remained unchanged.

The Asian nations industrial production surprisingly expanded by 10.3% last month, defying analysts projections that factory output growth will decelerate to 10.0% after it jumped 10.2% a month earlier.

Chen Letian, an economist at Rising Securities in Beijing, commented for CNBC: “Overall, the data showed that economy is stabilizing, but there are still many external uncertainties. We dont expect the central bank to tighten policy sharply, although it may fine-tune policy by targeting market liquidity.”

Data by China’s General Administration of Customs showed on Friday the Asian nation’s exports rebounded above expectations in October after declining in September. Stronger global demand sent overseas shipments soaring by 5.6% last month, exceeding analysts’ projections for a surge of 3.2% from the previous month’s 0.3% decline. Meanwhile, China’s inbound shipments rose at a slower-than-expected pace but still marked a healthy expansion. The Asian country’s imports rose by 7.6% in October, underperforming expectations for an advance of 8.5% but still marked an improvement from September’s 7.4% gain. The upbeat exports reading widened the nation’s trade balance surplus to $31.10 billion, compared to projections for a rebound to $23.90 billion from the preceding period’s plunge to $15.20 billion.

The upbeat reading backed a statement by China’s Vice Premier Zhang Gaoli who said earlier in the week that economic conditions are stable and that the country can meet its main economic targets this year.

Chinese leaders, including President Xi Jinping and Premier Li Keqiang, began a four-day meeting on Saturday to set a reform agenda for the next decade. Chinas government pledged to run tough economic reforms in order to make economic growth less dependable on foreign investment and shift it to domestic consumption-based.