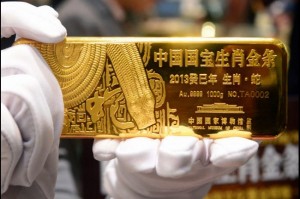 Gold extended its first weekly loss in three as the U.S. dollar continued to regain positions on speculations the Federal Reserve might begin scaling back its bond purchases earlier than previously projected after FOMC policy makers noted “underlying strength” in the economy. Expectations for a softer demand during Indias festival season also weighed on prices. Silver was little changed, while platinum and palladium posted moderate gains.

On the Comex division of the New York Mercantile Exchange, gold futures for December settlement traded at $1 320.90 per troy ounce at 9:23 GMT, down 0.21% on the day. Prices held in range between days high of $1 327.30 and low of $1 319.70 per troy ounce, the weakest level since October 22. The precious metal lost 1.1% on Thursday, a fourth consecutive daily retreat, and extended its weekly decline to nearly 2.2%, the first in three weeks.

Gold extended losses as a stronger U.S. dollar continued to pressure down dollar-denominated commodities. The currency rebounded this week after falling in the last two after policy makers announced after the conclusion of FOMCs two-day meeting that they still see the U.S. labor market and economy as a whole as fragile but an underlying strength was notable. Fed officials seemed less optimistic about economic growth on Wednesday, and especially worried about the recovery of the housing and labor markets, pledging to maintain the current $85 billion per month bond purchasing pace until “the outlook for the labor market has improved substantially.”

However, policy makers noted there were signs of “underlying strength” in the economy and kept a tone which left the 16-day government shutdown in October and the possibility for a U.S. debt default on the sidelines, shifting focus to upcoming key data points. According to a Bloomberg survey of 40 analysts conducted on October 17-18, the Fed will begin scaling back its bond purchases in March. However, according to Citigroup, the odds for tapering in January rose to 45% from 25% following FOMC’s after-meeting statement. The precious metal has been tracking shifting expectations of Fed’s tapering timetable throughout the year and has lost 21% so far.

Data by the the Department of Labor showed on Thursday that the number of people who filed for initial unemployment benefits in the week ended October 26 fell by 10 000 to 340 000, slightly underperforming the median estimate of analysts surveyed by Reuters for a drop to 339 000.

The four-week average, which irons out weekly volatility, rose to 356 250 last week from 348 250. The average reading before the fiscal deadlock and the computer issues in California stood at 305 000 claims filed, indicating that the 16-day government shutdown in October had a negative impact on the labor market but the effects seemed to be diminishing.

The U.S. dollar index for December settlement rose for a sixth consecutive day and traded at 80.53 at 9:29 GMT, up 0.24% on the day. The U.S. currency gauge jumped to a day’s high of 80.58, the strongest level since October 17, and extended its weekly advance to 1.6%. Strengthening of the greenback makes dollar-denominated raw materials more expensive for foreign currency holders and limits their appeal as an alternative investment.

Golds slide is expected to be limited amid broad expectations physical demand will rebound after the precious metals recent losses. However, purchases in India, the worlds biggest consumer, are expected to decline during this years festival season after the Indian government introduced higher taxes and limitations to gold imports earlier in the year as a measure to battle a record current-account deficit.

According to the All India Gems & Jewellery Trade Federation, purchases of coins and bars may fall to 25% from what consumers bought a year earlier. Indias Commerce Ministry said earlier in the month that purchases of gold and silver fell to the equivalent of $800 million in September, down from $4.6 billion during the same period in 2012.

Haresh Soni, chairman of the federation, said for Bloomberg on October 30: “Jewelers say that demand for coins and bars this season could be only 25 percent of what they saw in the festival season last year and jewelry demand will be moderate. Jewelers are quite alert that if they sell coins, they will not get raw material to make jewelry.”

However, consistent demand from China, currently the second-biggest consumer, continued to limit losses. The countrys net imports from Hong Kong remained over 100 tons for a fifth consecutive month in September, keeping the country on track to overtaking India as number one consumer this year. Net inflows fell to 109.4 metric tons last month from 110.2 in August, according to Bloomberg calculations. Nevertheless, the total amount in the first three quarters more than doubled to 826 tons from a year earlier. According to the World Gold Council, Chinas total consumption may jump by 29% to over 1 000 tons by the end of 2013, becoming the largest consumer.

Helen Lau, an analyst at UOB Kay Hian Securities in Hong Kong, said for CNBC: “Gold prices are still under pressure from outflows from exchange-traded funds. At the same time, retail demand is very healthy. There is strong demand even after the April rush,” referring to Chinas imports. “I think the demand is still sustainable,” Lau added.

Assets in the SPDR Gold Trust, the biggest-bullion backed ETF, remained unchanged for a fifth day at 872.02 tons, near the lowest since February 2009, data on the web site showed.