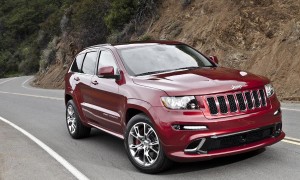 Chrysler makes cars and trucks under the Jeep, Dodge and Ram brands, said vehicle sales added 8% this quarter, driven mainly by a 16% increase in its home market.

However, the company had a negative free cash flow of $343 million during the quarter, contributed to a $600 million payment to the healthcare trust, which owns 40.5% of Chrysler, and costs associated with the delayed Jeep Cherokee.

The car-maker is in better financial health than Fiat, and on Wednesday affirmed full-year guidance of $72 billion to $75 billion in revenue and free cash flow of at least $1 billion. The guidance was thought to be under threat due to a delayed launch of its key Jeep Cherokee SUV, which began shipments last week.

“Chrysler’s U.S. sales grew again in the third quarter and have now reached pre-recession levels,” Karl Brauer, senior analyst at Kelley Blue Book, said in an e-mail for Bloomberg. “The highly profitable Ram division is driving much of this growth, with sales and transaction prices up. Jeep is another bright spot, with the Grand Cherokee and Wrangler both contributing to higher transaction prices and increased profit.”

Chrysler’s value has increased to $13.5 billion, according to UBS, while US car industry auto sales head toward their best year since 2007.

Chrysler today reaffirmed its July forecast of an operating profit of $3.3 billion to $3.8 billion, compared with a previous target of about $3.8 billion. Operating profit was $2.9 billion last year. The company predicted deliveries of about 2.6 million vehicles.

General Motors Co. today announced third quarter net income to common stockholders of $0.7 billion or $0.45 per share, down from $1.5 billion or $0.89 per share a year ago. Improvement in operating performance during the quarter was more than offset by a net loss from special items and incremental tax expense.

“We made gains in the third quarter as we improved our North American margins and increased our global share on the strength of our Chevrolet brand,” said Dan Akerson, GM chairman and CEO. “Our efforts to build great cars and trucks and deliver solid financial results were recognized this quarter by Moody’s investment grade rating.”

Last month Moodys upgraded GMs rating to investment grade of Baa3 equal to BBB- rating due to improvements of the financial condition of the company.

”We think that the disciplines the company has embraced, combined with the strength of its U.S. product portfolio and a healthy domestic market, will enable it to stay on that path,” Bruce Clark, a senior vice president at Moody’s, said in a statement in September.