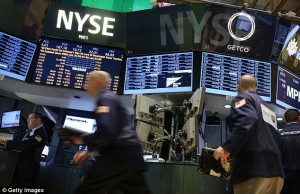 U.S. stock index futures remain little changed, pointing to a higher open of the Standard & Poors 500 Index which would most likely extend to a new record as investors focus their attention on industrial-output and housing data before the Federal Reserve’s policy meeting.

Futures on the S&P 500 expiring in December gained 0.1% to 1,756 at 11:49 a.m. in London. Stocks rose for a third week last week as Amazon.com Inc. and Microsoft Corp. posted sales that beat estimates while a drop in consumer confidence added to speculation the Fed will delay scaling back stimulus. Dow Jones Industrial Average contracts added 45 points, or 0.3%, to 15,518 today.

“We do not see the Fed changing policy until at least March next year,” Stewart Richardson, who helps oversee about $100 million as chief investment officer at RMG Wealth Management LLP in London, said in an e-mail to Bloomberg. “Assuming investors’ reactions remain the same, it is likely that equities will move higher for a number of months yet and volatility will move lower. Investors need to be aware that low levels of volatility presage a turn in market conditions.”

In corporate news, Apple’s fiscal fourth-quarter results would be the highlight of todays earnings report. Analysts surveyed by FactSet forecast the company to report earnings of $7.92 a share, down 9% from the same period a year earlier. Although the focus of the market has already shifted, with many analysts and investors becoming increasingly interested in what the past quarter’s numbers say about Apple forecasts rather than the numbers themselves.

“We believe the core focus will be on December guidance, since Apple already reiterated the high end of its guidance for September ($34-$37 billion in revenue) following the iPhone 5S launch,” said Gene Munster at PiperJaffray, according to a MarketWatch preview story.