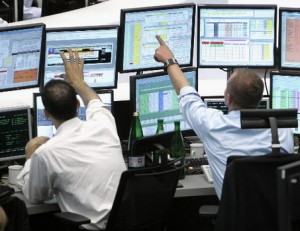 Meanwhile investors remained focused on the U.S., looking for clues to when the Federal Reserve will start scaling back its bond purchases. A U.S. index of consumer sentiment fell to the lowest reading in almost a year on Friday, adding to hopes that the central bank will delay the tapering process until 2014.

“It seems with all the problems concerning the U.S. debt ceiling — replacing the head of the U.S. central bank, as well as the stark disagreements between political parties which could adversely affect growth rates — then perhaps there is a case for arguing that tapering would not be appropriate within the present context,” said Shavaz Dhalla, financial trader at Spreadex, in a note for MarketWatch.

In European corporate world, shares of TNT Express rose 3.5% after the Dutch parcel-delivery firm said it will take further steps to improve its business as market conditions continue to be challenging.

Shares of Assa Abloy AB increased by 3.1% after the Swedish lock-maker reported a 5% rise in third-quarter sales while shares of Gemalto NV lost 2.3% after Credit Suisse cut the digital-security firm to “neutral” from “outperform” and lowed revenue estimates.