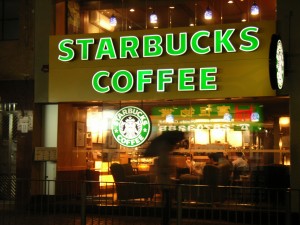 In a report by the official China Central Television Starbucks Corp has been accused of charging customers in China higher prices than other markets, leading to the company high profit margins.

The report by CCTV pointed out on Sunday that a medium-size latte at the U.S. coffee seller in Beijing costs 27 yuan ($4.43), or one-third more than at a Chicago store in the United States.

“Starbucks has been able to enjoy high prices in China, mainly because of the blind faith of local consumers in Starbucks and other Western brands,” Wang Zhendong, director of the Coffee Association of Shanghai, told CCTV. The report was a follow-up of separate critique by the official China Daily newspaper published last week.

Starbucks responded in a e-mail send to Reuters that companys pricing plan in China, which is going to be its second-biggest market as it is expanding quickly, is tied to various local costs such as labor and commodity costs, infrastructure investment, currency and real estate.

“Each Starbucks market is unique and has different operating costs, so it would be inaccurate to draw conclusions about one market based on the prices in a different market,” the company said.

For example, imported products often cost more in China because of high import duties and tax rates. Roasted coffee beans, for example, draw an import duty of 15% and a sales tax of an additional 17%, according to DutyCalculator.com, a website measuring duties and taxes of countries all over the world.

Apple has also come under criticism in China for high prices, as the U.S. firm was accused in a media statement last year which revealed it treated Chinese consumers differently to those from other regions.

The quick growth of the market helped the China-Asia Pacific region top the sales growth table for Starbucks in 2012, and has prompted the company to consider opening 600 new outlets in the region this year, targeting 1,500 stores in China alone by 2015. Starbucks had a profit margin of 32% in China-Asia Pacific in its second quarter, compared to 21% in the Americas and 2% in Europe, Middle East and Africa, according to the CCTV report.

The current consensus among 31 CNN Money polled investment analysts is to buy stock in Starbucks Corp. The coffee seller advanced by more than 47% year-to-date.