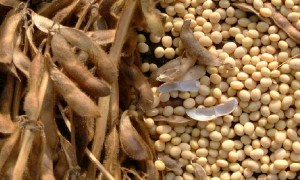 Grain futures fell on Tuesday with corn and soybeans marking minor daily changes, while wheat posted a moderate decline amid favorable weather conditions in the Southern Plains and Ukraine.

DTN reported on October 14 that moderate to heavy rain in the western and northern parts of the Midwest will disrupt row crop harvests, while recharging moisture in some areas. Meanwhile in Brazil, the worlds second biggest producer after the U.S., showers followed by lower temperatures will provide favorable conditions for crop developing while causing some planting delays.

The USDA said in its latest WASDE report that the nation will harvest a record 13.843 billion bushels of corn in 2013, 28% above last-year’s drought damaged crop. The next forecast update was scheduled for October 11 but was delayed due to the lapse of government funding.

Wheat was well supported recently as wet weather in the Black Sea Region threatened to decrease production in Russia and Ukraine. Ukraine’s national weather center in Kiev said on September 27 that the nation’s winter-wheat planting may be 30% lower than expected following record rainfall.

Meanwhile, Russia’s agriculture Minister Nikolai Fedorov said last week that his country may plant only 13 million hectares of wheat next year, down from previously projected 16.4 million.

DTN reported on Monday that scattered showers this week in the Southern plains should maintain favorable conditions for developing of wheat, while causing some plating delays. Meanwhile, a dry period in Ukraine has improved conditions for planting of the winter wheat crop and the delayed summer crop harvests. In Western Europe, a drier trend may begin later in the week, allowing recently delayed field work to resume. In Australia, a West Australia cooperative raised its forecast for Western Australias 2013-14 grain harvest to 13 million tons from Septembers estimate of between 11.5 and 12.6 million tons.