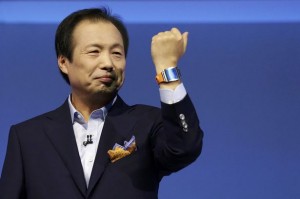 Tech giant Samsung finally announced its long-rumored Galaxy Gear smartwatch at a trade show in Berlin on Wednesday, kicking off what will likely be a tech battle over consumers choice of smartwatches. By presenting the device Samsung Electronics has become the first global mobile computing company to launch a smartwatch, leaping ahead of rivals Apple, Google and Microsoft in the “wearable technology” market.

“Device makers like smartwatches because they are personal devices that are highly visible to consumers,” Neil Mawston, an executive director at Strategy Analytics, said in an e-mail for Bloomberg. “If you see your friend wearing a cool smartwatch on their wrist, you will probably want one, too.”

The South Korean company is optimistic that the Galaxy Gear will be a new growth driver amid increasing concerns that the high-end smartphone market is nearing its peak in the US and Europe. Analysts in Seoul said the Galaxy Gear was unlikely to make a significant contribution to Samsung’s profits, but a successful launch could boost the company’s brand.

“It’s good to showcase something that will boost the perception of Samsung’s capabilities, but there’s not much that they can expect commercially from this product,” said Marcello Ahn, a fund manager at Quad Investment Management.

However, the limited functionality of Samsungs smartwatch and small screen could disappoint those who had expected a watch with a full range of functions and a bendable display that would conform to a human wrist.

The Galaxy Gear also is limited to working in tandem with Samsungs own line of phones. It will be pitched as a companion device to its latest generation smartphone-tablet called the Galaxy Note 3, which the company also announced Wednesday.

The new Galaxy Note 3, which is slightly larger than its previous version, is better equipped for multitasking, according to Samsung, allowing users to open multiple frames at once. But it also gives the devices stylus, called the S Pen, a more prominent role, testing users resistance to relying on the tool.