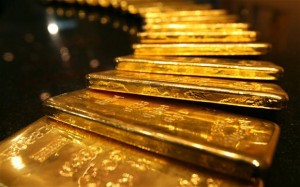 Gold erased previous gains during the day as concerns over financial problems in Greece and Portugal and political tension in Italy weighed on the Euro, which strengthened the dollar.

Gold tumbled during the European session through the early U.S. session as the dollar extended gains versus its counterparts. The greenback gained, laying pressure on dollar-priced commodities. A stronger dollar reduces raw materials’ appeal as an alternative investment and makes them more expensive for foreign currency holders. The greenback pushed against the Euro today as Greece, the EU’s most troubled member, received a three-day deadline by the “troika” to deliver on conditions attached to its international bailout in order to receive the next tranche of monetary aid. EU officials said that Greece’s three lenders, the EU, IMF and ECB are not happy with the country’s progress towards its public sector reforming.

A Reuters source said for the media: “All agreed that Greece has to deliver (pledges) before the Eurogroup on Monday. That’s why they must present again on Friday”.

The dollar index, which tracks the greenbacks performance against its six major counterparts, rose 0.38% on the day. The U.S. currency gauge traded at 83.51 at 14:43 GMT and varied between days high and low of 83.72 and 83.18 respectively. It settled 0.98% higher last week and marked a 2.21% gain during the preceding one.

The precious metal has declined 27% this year, 23% of which during the second quarter, amid expectations of an earlier-than-expected scale back of Fed’s monetary easing program. The future of Quantitative Easing has been one of the main factors to determine the greenback’s strength. Ben Bernanke, Fed chairman, announced after the latest FOMC meeting that the central bank won’t scale down its monetary easing program just yet, but that is highly possible to happen within the end of the year, if the needed stable recovery signs are provided. According to Bernanke, Fed’s moves are tied to what happens in the economy and the central bank has no fixed plan, but sentiment points at reducing bond purchases. Bernanke said that if the economy continues to improve in line with Fed’s projections, it would be “appropriate to moderate the monthly pace of purchases later this year”, and end the program as the unemployment rate drops to 7%, which Fed expects to happen around mid-2014.

Investors are now looking ahead into this week’s key U.S. data that will show if the economy’s recovery keeps in line with Fed’s projections. The ISM Non – Manufacturing Composite index is due on Wednesday, coupled with the Trade Account, which is expected to show a 40 billion deficit. Also on Wednesday, the ADP Employment Change and Initial Jobless Claims will give a preliminary insight into the U.S. labor market’s state, prior to Friday’s most important Change in Non-Farm Payrolls and Unemployment Rate indicators.