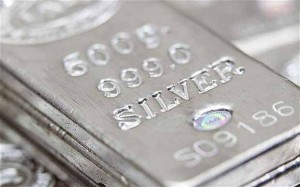 Silver extended gains today after rebounding on Friday from $18.183, the lowest level since August 2010. Investors returned to the market lured by the attractive prices.

On the Comex division of the New York Mercantile Exchange silver futures for August delivery traded at $19.640 per troy ounce, up 0.87% on the day. Prices ranged between days high at $20.065 and low of $19.370. On Friday, silver futures fell to a low of $18.18 a troy ounce, the cheapest level since August 24, 2010, after which a rebound followed and the precious metal settled 5.82% higher. However, silver still marked a 2.01% weekly loss last week and an 8.99% decline during the previous one.

Silver prices have largely been tracking shifting expectations over a premature deceleration of Feds Quantitative Easing program. Silver is the worst performer in the Standard & Poor’s GSCI gauge of 24 commodities this year and has lost nearly 31% of its value during the second quarter. Silver was hammered down during last two weeks as Ben Bernanke, Fed chairman, announced after the latest FOMC meeting that the central bank won’t scale down its monetary easing program just yet, but that is highly possible to happen within the end of the year, if the needed stable recovery signs are provided. According to Bernanke, Fed’s moves are tied to what happens in the economy and the central bank has no fixed plan, but sentiment points at reducing bond purchases. Bernanke said that if the economy continues to improve in line with Fed’s projections, it would be “appropriate to moderate the monthly pace of purchases later this year”, and end the program as the unemployment rate drops to 7%, which Fed expects to happen around mid-2014.

The Federal Reserves intentions are backed by overall positive signs of economic recovery that were provided during the last two weeks. Stable and low inflation pressured the precious metals, which are used as a hedging strategy against inflationary effects. Last week, Initial Jobless Claims mismatched expectations by a minor 1 000, but still showed an improvement, compared to the previous week. The indicator stood at 346 000, well below the preceding weeks 355 000. Personal Income for May surpassed expectations of 0.2% and surged to 0.5%, up from April’s revised 0.1% figure. Personal Spending for May met anticipations at 0.3%, well above the preceding month’s revised reading of -0.3%. Core Personal Consumption Expenditures met projections both on monthly and annual basis. Core PCE for May stood at 0.1%, up from April’s 0.0% and was 1.1% higher than May 2012.

On Friday, the Chicago PMI disappointed by mismatching forecasts of 55.0, standing well below at 51.6, also worse than May’s 58.7 reading. However, that bit of negative data was offset by the Final University of Michigan Confidence, which exceeded expectations of a gain to 83.0 and instead rose to 84.1, up from May’s 82.7.

Meanwhile, investors are looking ahead at this week’s key U.S. data that will show if the economy’s recovery keeps in line with Fed’s projections. The ISM Manufacturing index is due on Monday and the ISM Non–Manufacturing Composite index on Wednesday, coupled with the Trade Account, which is expected to show a $40 billion deficit. Factory Orders will be published on Tuesday. On Wednesday, the ADP Employment Change and Initial Jobless Claims will give a preliminary insight into the U.S. labor market’s state, prior to Friday’s most important Change in Non-Farm Payrolls and Unemployment Rate indicators.