Skip to content
« How to Reduce Risk in Trading via Protective Stops
Other Kinds of Stops – Signal, Time, Targets, Execution »

Once a protective stop is in place, the price action will either trigger that stop or the trade will begin to register gains. After a certain amount of profit has been accumulated, the trader will need to maximize this profit without giving up too much of what has been gained. In such a case the trader will use a trailing stop in order to lock in his/her gain.

Trailing stops are stop loss orders, which follow the course of trade and move in favor of a traders either long or short position. It is more flexible than the fixed stop loss, because it follows a currency pairs value direction and does not need to be manually reset like the fixed stop loss.

How are they used? 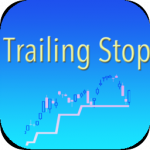 Let us provide an example. A trader decides to go long the USD/JPY pair with 5 000 units at 104.00 and sets a 2% trailing stop order (or Good Til Cancelled order) to secure his/her position. This means that if USD/JPY declines by 2% or even more, the trailing stop order will be triggered, limiting losses. Over the next month the pair increases in value, reaching 105.50, thus gaining 1.44%. The trader is obviously enjoying the profit he has registered for the moment, but expresses concerns that the pair may retrace its gains. As his/her trailing stop remains in place, if the currency pair declines 2% or more, say within the next week, the trailing stop will be triggered. The trader may decide to tighten the trailing stop to 1.50%, allowing his/her trading position more room to run.

Over the next few trading sessions, USD/JPY appreciates further, reaching 106.00, but then suddenly tumbles 1.50% within a single trading day to 104.40. This 1.50% decrease would trigger the trailing stop and assuming the order was executed at 104.40, the trader would lock-in 40 pips of profit.

Have in mind that if the pair has recorded a drop of, say 0.55% that same day, the trailing stop would not have been triggered, because it has been set to 1.50%. Therefore, it is important to set the trailing stop percentage at a level that is neither too tight, nor too wide. If the stop is placed within a distance too close to the current market price, the trade would be stopped before it has a chance to develop. If the stop is placed within a distance too far from the current market price, if triggered, this could cause the trader to leave too much money on the table.

It is also possible to adjust trailing stops manually with the help of technical indicators such as moving averages, channels or trend lines.

Here we can see how to move the trailing stop in stages below the moving average, as the value of EUR/USD surges.

« How to Reduce Risk in Trading via Protective Stops
Other Kinds of Stops – Signal, Time, Targets, Execution »