Trading channels are a very common occurrence on the financial markets, and as such day traders tend to use breakouts from channels as another tool for earning extra profit. Channel breakouts are a viable strategy for currency trading because the Forex market is very liquid, but also experiences high volatility during releases of major economic data. The market spends much more time trending in a certain direction than holding within a set of tight boundaries, thus it is bound to break out soon enough.

As you know, the Forex market is open around the clock, except for the weekends, and the different trading sessions favor the trading of specific currency pairs. Moreover, overall trading activity also varies and picks up during the sessions when data from the US is released, thus they present a higher chance for breakouts. If you want to read more on the different trading sessions, visit Binary Tribunes Forex Trading Academy and more particularly our “Trading Sessions” article.

Because the Asian session is known for its lower volatility, channels are often formed during those trading hours. However, as key European and US economic data are released during the respective sessions, and especially during their overlap, trading volumes experience significant spikes, which often leads to breakouts from the previously formed channels. Thus, it is of utmost importance for day traders to keep a close watch on significant economic releases, especially when the price is near the top or bottom of a trading channel. If this is the case, then you should aim to enter in the breakouts direction and not fade it (counter-bet). Because channels are easily spotted and drawn, the majority of market players will likely also be aware of their existence, thus broad market reactions are to be expected.

We have spoken on several occasions about trend lines, trend channel lines and the trading channels they form. You can read our “Channel” article, “The Trend – a Traders Best Friend“, and also the article “Trend Channel Lines in Price Action“.

Having read those articles, you should have learned that there are several ways for a trend channel line to be drawn, which depends on the traders unique perspective and understanding of trading. The most common way, however, is plotting it as a parallel line to the trend line. If the market is not trending, rather trading sideways, then the channel will be horizontal and the two boundaries are basically broadly accepted support and resistance levels.

In the best case scenario, the resulting channel will contain all, or at least most, of the price action within it. This is due to the two boundaries nature of strong support and resistance levels. The goal a day trader seeks to achieve is to accurately predict a penetration of one of the boundaries that will be supported by enough follow-through buying or selling and thus become a successful breakout. Because this strategy works at times of high volatility, it will be most effective at the open of the major financial markets and during the release of critical economic indicators, such as US non-farm payrolls, ISM reports, consumer inflation, interest rate decisions etc.

The most common breakout strategy day traders use involves the following steps:

– look up a trading channel which is as close as possible to perfection – most of the price action must be contained within it
– enter a long or short position as the price penetrates the channels upper or lower boundary
– place a protective stop below the upper channel line in a long position, or above the lower channel line in a short position
– trail your stop higher/lower as the price moves in your favor.

These were the general guidelines, so lets discuss some of the details. When you see a distinctive trading channel, you should place entry orders on both sides of the channel, so that you can benefit from a breakout in either direction. It would be best, if those entry orders are placed at around 10-15 pips beyond the penetration point so that they are not triggered by random noise. The stop-loss order must be positioned at the same number of pips from the entry point, but on the other side of the trend channel line. Your profit target should be double the amount of the channels range and should be combined with a trailing stop, if you want to squeeze more profit out of the breakout. You can use both a percentage or absolute value for the trailing stop.

Lets take a look at a market example. 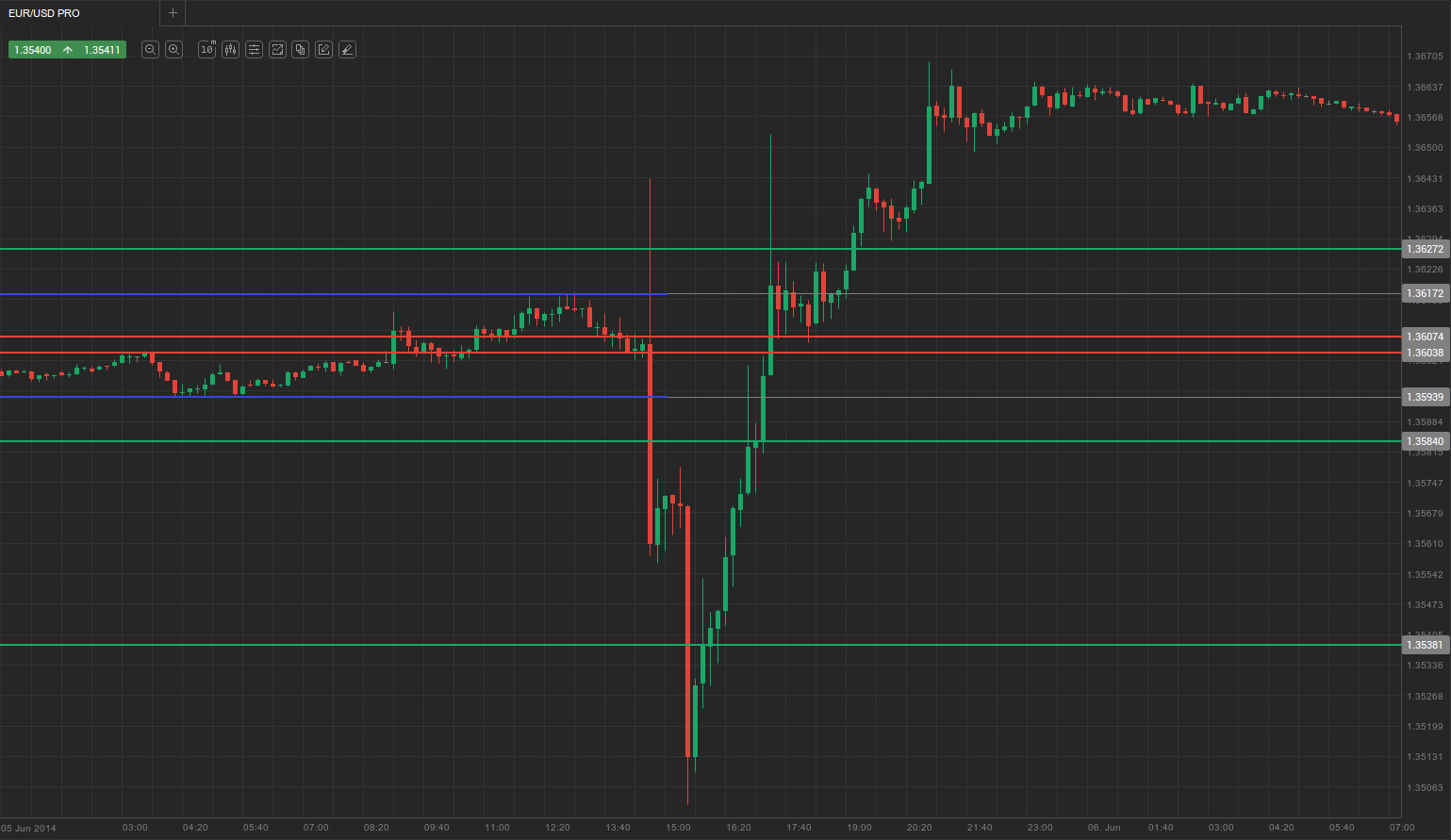 As you can see, the market held in a relatively tight trading range throughout the Asian session and into early European trading hours, as opposed to the following move. Market players expected huge volatility as the European Central Bank was anticipated to cut its benchmark interest rate as consumer inflation within the euro area continued to drift away from ECBs targeted level and sparked fears of deflation. And so it did. The markets knee jerk reaction was a major decline, which would have benefited bears.

On the screenshot you can see the trading channel encompassed by the two blue lines, wide approximately 23 pips. Based on our trading strategy, we place entry orders 10 pips above and below the channel, as visualized by the green lines. Our protective stops are then placed 10 pips beneath and above the upper and lower channel boundary, as shown by the red lines. As the price drops and triggers our short-entry order, our profit target is double the channels range – 46 pips. Upon hitting it, you might choose not to close your position, rather milk the move down by trailing your stop.