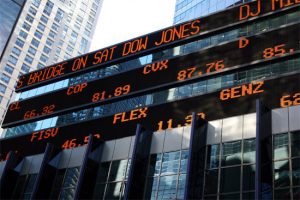 Among the companies included in the benchmark, only 1 posted a daily decline on Tuesday and 29 posted a daily gain. Shares of United Technologies Corporation (UTX) were the only ones to close lower on March 1st, going down 1.62% to close at $95.05. It has been a third successive daily drop and also the steepest one since February 11th. March 1st low of $92.07 per share has been the lowest price level since February 24th, when a low of $91.11 per share was registered, while the daily volume (12.35M) has been the highest since February 26th. United Technologies added 10.18% to its value in February, while marking its steepest monthly gain since October 2015.

At the same time, the shares of JP Morgan Chase & Co (JPM) registered the most notable daily increase within the DJIA on March 1st, going up 5.15%, to close at $59.20, while marking their 11th gain in the past 20 trading days and also the sharpest one since February 12th. March 1st high of $59.20 per share has been the highest price level since February 17th, when a high of $59.25 per share was reached. The daily trading volume (23.96M), in addition, has been the highest since February 24th. JP Morgan lost 5.38% of its value in February, while marking its third consecutive month of decline.

Apple Inc (AAPL) was the second best performer within the Dow on March 1st, appreciating 3.97%, to close at $100.53. It has been the 12th gain in the past 20 trading days and also the most considerable one since January 22nd, when the Apple stock surged 5.32%. March 1st high of $100.77 per share has been the highest level since January 26th, when the Apple shares went up as high as $100.88. Additionally, the daily trading volume (50.41M) has been the highest since February 8th. The technological giant lost 0.67% of its value in February to mark its fourth consecutive month of decline, but yet, the smallest one in at least three years.

By employing the traditional calculation method, the Wednesday pivot levels for DJIA are presented as follows:

By using the traditional method of calculation again, the weekly pivot levels for DJIA are presented as follows: