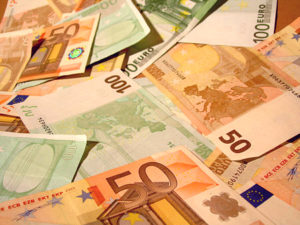 The euro regained ground against the US dollar on Friday, after it retreated from the strongest level since October 2011 a day before, following comments by the ECB President Mario Draghi that the central bank is closely monitoring gains in the 18-nation common currency.

The euro regained ground against the US dollar on Friday after falling as much as 0.3% a day before, the most in 10 days, when ECB President Mario Draghi commented the central bank’s forward guidance may play a decisive role in weakening the 18-nation common currency and lowering real interest rates. ECB’s forward guidance says that central bank officials will maintain official interest rates at present or even lower rates for a prolonged period of time.

Draghi said on Thursday that while the exchange rate is not part of the prerogatives of the ECB, the currency level became “increasingly relevant in our assessment of price stability.”

Forward guidance “creates a de facto loosening of policy stance, as real interest rates are set to fall over the projection horizon,” Draghi said in Vienna, cited by Bloomberg. “At the same time, the real interest-rate spread between the euro area and the rest of the world will probably fall, thus putting downward pressure on the exchange rate, everything else being equal.”

The Governing Council of the ECB refrained from easing monetary policy on March 6 and maintained its benchmark interest rate at a record-low 0.25%, saying the euro area economy is recovering in line with the central bank’s baseline scenario.

“Our base-case scenario is that the euro breaks $1.40 in the coming weeks,” said Serebriakov of BNP Paribas, cited by Bloomberg. “Draghi’s comments reduce the risk of a large overshoot of the euro. It makes say $1.42 less likely, but $1.40 is still very much in the cards.”

While the recovery remains fragile, with inflation still less than half the ECB target of 2%, which the central bank uses to define price stability, economic data in the past four weeks seemed encouraging. Gross domestic product in the 18-nation common currency area rose 0.3%, more than analysts had projected, mainly driven by stronger expansions in Germany, France, Netherlands and a return to growth in Italy. In addition, economic sentiment jumped to more than a 2-1/2-year high last month, while services and manufacturing output surged the most since June 2011.

Meanwhile, preliminary data showed on Friday that US consumer confidence unexpectedly declined in March, with the corresponding Thomson Reuters/University of Michigan index of sentiment probably coming in at 79.9, down from a final reading of 81.6 in February and confounding analysts’ expectations of an increase to 82.0.

Also fanning negative sentiment, the US Bureau of Labor Statistics reported today that the producer price index of the country declined 0.1% in February, trailing analysts’ estimates of a 0.2% increase and after it rose 0.2% in the previous month. Year-over-year, wholesale prices advanced 0.9%, short of analysts’ projections of a 1.2% increase and down from a 1.2% gain in the 12 months through January.

The decline in US wholesale prices was broad-based, with clothing retailers, airlines and real-estate brokers all experiencing lower price pressure last month. The weak inflation data will probably give Fed officials more room to put low borrowing costs on hold, when they next meet on March 18-19th.

Fridays PPI report released today was the second using a refined index that encompasses 75% of the US economy, up from just one third of all output for the old index, which took into account only goods. The new gauge, which hasn’t been overhauled significantly since 1978, PPI now also reflects prices of services, government purchase, exports and construction.

Wholesale prices, excluding the volatile food and energy, declined 0.2% in February, confounding analysts’ expectations of a 0.1% increase and after they advanced 0.2% in the previous month. Yer-over-year, the index rose 1.1% in February from a year ago, down from a 1.3% increase in the previous month and trailing analysts’ estimates of a 1.4% gain.

During the week ahead investors’ attention will be focused on the outcome of Federal Reserve Bank’s meeting on monetary policy, scheduled for March 18th-19th.

EUR/USD may be influenced by a number of reports/events, which are expected during the next week as follows:

On Monday (March 17th), the euro zone will release data on its harmonized index of consumer prices, which is projected to have increased 0.4% on a monthly basis in February, after a 1.1% drop in the previous month.

At 12:30 GMT the Federal Reserve will announce the results of its March survey, encompassing manufacturers in the area of New York. This data will be followed by a report on industrial production in the United States in February.

On Tuesday (March 18th), the euro zone and its largest economy, Germany, will produce separate reports on the economic sentiment for March.

At 12:30 GMT the United States will release a report regarding consumer price inflation in February, which will be accompanied by data on housing starts and building permits during the same month.

On Wednesday (March 19th), the United States is expected to release data regarding its current account during the last quarter of 2013.

At 18:00 GMT the Federal Open Market Committee will announce its decision on interest rates and the monthly size of monetary stimulus, which market players expect to be trimmed by another $10 billion. The decision will be followed by a statement by Fed Chair Janet Yellen.

On Thursday (March 20th), the United States is to publish its weekly report on the number of initial jobless claims during the week ended on March 15th.

The National Association of Realtor’s (NAR) will present data regarding sales of existing single-family homes in the country during February.

At 14:00 GMT the Federal Reserve will announce the results of its monthly business survey, encompassing manufacturers in the region of Philadelphia.

On Friday (March 21st), the euro zone will report on its current account balance in January.