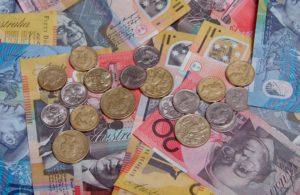 Australian dollar climbed to fresh one-month highs against its US counterpart on trading Tuesday, following the release of the minutes of Reserve Bank of Australias (RBA) most recent policy meeting, which showed further signs that accommodative policy and weak national currency have led to positive economic effects.

According to the minutes of RBA’s most recent meeting on policy, released earlier today, the central bank indicated “a period of stability in interest rates”, after record-low borrowing costs and low exchange rate of the national currency seem to have supported Australian economic growth. Bank policymakers will probably continue to closely monitor price development, after the rate of inflation in the country unexpectedly increased.

“There is less emphasis on the level of the currency assisting in the rebalancing of the Australian economy,” said Robert Rennie, the global head of currency and commodity strategy at Westpac Banking Corp. in Sydney, cited by Bloomberg News. “If they wanted to, they could have added more concern that Australia needs a sustainably low level for the currency. The fact that they did not, should help the Aussie dollar pop.”

An exchange rate of AUD/USD above 0.9000 will probably not be sustained, because Australia attempts to re-balance its economy, while moving away from its reliance on the mining industry. The Aussie will probably depreciate to 85 U.S. cents or even lower by the end of the year, according to Stephen Miller, a Sydney-based fund manager at BlackRock Inc.

The Reserve Bank of Australia will probably add 15 basis points to its current record-low benchmark interest rate of 2.50% over 12 months, Bloomberg reported, citing a Credit Suisse Group AG index based on swaps.

In a report released on February 15th, People’s Bank of China said that aggregate financing, which is the widest indicator for lending activity in the country, was at the amount of 2.58 trillion yuan (or 425 billion US dollars). New loans, denominated in local currency, reached 1.32 trillion yuan in January, or the highest level since 2010.

Meanwhile, at 13:30 GMT the United States is to release the first indicator for nations manufacturing activity during the current month, the New York Empire Manufacturing Index. The median estimate of experts showed that the index probably slowed down to a reading of 9.50 in February from 12.51 in January. Positive readings are indicative of expansion in activity.