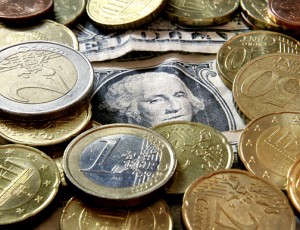 The euro advanced to one-week highs against the US dollar on Thursday, following Mario Draghis comments that the euro zone will not experience deflation, after the European Central Bank (ECB) decided to maintain its benchmark interest rate at the current record low level.

Overnight implied volatility on the euro reached a three-year high, while premiums on overnight options for the 18-nation common currency against the US dollar surged to 17.6%, set to close at the highest level since December 2011.

The European Central Bank announced today, at the policy meeting in Frankfurt, that it will maintain the benchmark interest rate at a record-low 0.25 percent, the deposit rate at zero and the marginal lending rate at 0.75%. In November, the central bank unexpectedly cut its benchmark interest rate to a record-low 0.25%, after annualized inflation rate in the euro area slowed down to 0.7%.

ECB President Mario Draghi said that the euro zone will continue to experience low inflation for an extended period of time, but the ECB will step in, if necessary, with the bank “monitoring developments closely.” Draghi also reiterated the forward guidance of the central bank, that rates will be kept at their current record levels, or even weaker, for a prolonged period of time.

Stuart Bennett, head of Group-of-10 foreign-exchange strategy at Banco Santander SA in London, commented in a Bloomberg News interview before the ECB decision: “Most people are expecting the bank to remain dovish, even if they don’t cut rates.” “You hear that sort of language and the knee-jerk response would be to sell the euro. There are downside risks more than upside risks.”

There have been growing concerns that the ECB may signal an interest rate cut or some form of quantitative easing, as deflation in the common currency area seemed to be just around the corner and unemployment remained at “uncomfortably high” levels.

Inflation in the euro area sharply declined to an annualized pace of 0.7% in January, the weakest level in four years and after a 0.8% increase in the previous month. Analysts had estimated that consumer prices will increase by 0.9% in January. This was a fourth straight reading of inflation under 1%, which was referred to by ECB President Mario Draghi as a danger zone. The central bank attempts to maintain inflation at just below 2%, which added to concerns over the threat of deflation in the region.

Inflation in Germany, the largest economy in the euro bloc, unexpectedly remained steady at 1.2% in January, defying analysts projections of an increase to 1.3%. This data came as another evidence of weak price pressure in the 18-nation common currency area.

This low inflation rate in the euro zone was mainly driven by a 1.2% slump in energy prices, Friday’s report showed. Core consumer prices, which exclude volatile items such as energy, tobacco and alcohol, however, increased by 0.8% this month, after a 0.7% advance in December.

The fragile recovery of the euro area continued to be underscored by mixed data.

Retail sales in the euro zone fell 1.6% in December, exceeding analysts’ forecast of a 0.7% decline. November’s reading received a downward revision to a 0.9% gain, from earlier estimates of a 1.4% increase. Retail sales in the 18-nation common currency area declined 1% in December, compared to a year ago, defying analysts’ projections of a 1.5% increase. November’s reading was also revised downwards to 1.3% advance from an early estimated 1.6% gain.

However, at the same time, the euro zone composite output index came in at 52.9 in January, just below the preliminary estimate of 53.2 and up from December’s reading of 52.1. Data revealed that the gain was mainly driven by growth in the manufacturing sector, where the increase in total new orders and new export business helped production to reach its highest level in almost three years.

Meanwhile, greenbacks demand was pressured following a report by the US Bureau of Economic Analysis, that revealed the nations trade deficit widened to $38.7 billion in December from $34.25 billion in the preceding month, defying analysts forecasts of an increase to 36 billion US dollars.

However, the number of initial jobless claims came in at 331 000 in the week ended February 1st, down from 348 000 in the previous week and less than expectations for 335 000 more people, filing for unemployment benefits.

The greenback experienced selling pressure, after Automatic Data Processing Inc. (ADP) reported on Wednesday that private sector in the United States added 175 000 new jobs in January, trailing analysts’ expectations of an increase in jobs number to 185 000. The number of new jobs added in December has been revised down to 227 000 from 238 000 previously. The ADP index is released two days before the release of the official data by the US Department of Labor. The report, due to be published on Friday, may show non-farm payrolls increased by 180 000 in January, after they rose by 74 000 in December, or the weakest level since June 2012.

The company-employment “number wasn’t dramatic on either side, it really focuses the attention back on the jobs numbers,” said Chris Gaffney, co-chief investment officer at EverBank Wealth Management Inc., cited by Bloomberg. “The dollar has lost some of its safe-haven appeal. The economic numbers we’ve seen in 2014 are bringing investors back to a more realistic assessment of the economy.”

The greenback briefly pared losses yesterday, as data by the Institute for Supply Management (ISM) made it clear that corporate structures in US services sector increased their activity in January. The corresponding PMI came in at a reading of 54.0 last month, exceeding experts’ forecasts of a value of 53.7, after the index stood at 53.0 in December. Values above the key level of 50.0 are indicative for expansion in the sector.