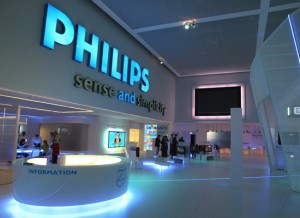 Royal Philips manufactures medical systems, domestic appliances, consumer electronics and lighting, and is currently pointed as the worlds largest lightning company. It posted a profit that exceeded the analysts estimates, while its Chief Executive Officer Frans van Houten forecasts that Royal Philips is likely to make “modest steps” toward its 2016 targets this year. Mr. Houten also explained that the company is currently facing some economic uncertainties, no matter that it managed to post a profit in 2013s fourth quarter.

He was cited by the Wall Street Journal: “Therefore, we expect that 2014 will be a modest step toward our 2016 targets, also taking into account restructuring to drive the new productivity targets and investments in additional growth initiatives.”

Royal Philips NV announced today that its earnings before interest, taxes, amortization and one-time items rose by 20% to 915 million Euro (1.3 billion dollars). This beats the analysts average estimates, which amounted to 874 million Euro.

The Chief Executive Officer of the company van Houten has undertaken the challenging mission of improving Philips profit at a time when the consolidations in the health-care market in the U.S. is still responsible for orders delays, and a range of hospitals and clinics in Europe shrink their budgets. On the other hand, the company is gaining success on the Chinese market, where sales of some domestic appliances surpass its forecasts.

One of the analysts working for ING – Robin van den Broek said in an interview for Bloomberg: “Overall the results seem a bit light. Looking at the divisions separately theres a miss in health-care, while order intake for that division also seems soft.” As reported by Bloomberg, he also said that a one-time royalty fee helped margins beat estimates, and investors are unlikely to be swayed by the cautious guidance and “marginally” higher dividend.

Now Philips NV is becoming more focused on some more profitable businesses such as LED lighting, health-care equipment and wellness offerings. At the same time, the company is trying to sell its DVD and multimedia divisions.

Last week Philips NV announced that its stake in a television joint venture is being sold to TP Vision. The company has one unsuccessful attempt of selling its DVD operations to Funai Electric Co based in Japan in October 2013. Currently there are several parties interested in the DVD operations unit of the company, which gives the analysts some grounds to consider that there is a deal possible this year.

Chief Executive Officer of Philips Frans Van Houten also said: “We expect that in the course of the first half of the year we should be able to make an announcement on that.”

According to Bloomberg, the current share price of Royal Philips NV is 0.94% down, and its one-year return rate is 24.79% up.