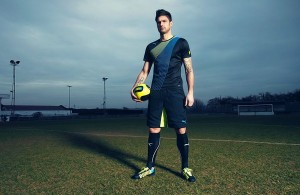 Puma SE officially announced that it made a multi-year agreement with with the English Premier League team Arsenal Football Club to supply the uniforms and merchandise for the London-based club. This is part of the German sportswear groups plan to bring a new life to its brand. The deal, which is said to be the largest commercial agreement in the 127-year history of Arsenal FC. Arsenal also said in a statement at the news conference that Puma takes over on July the 1st, 2014.

By signing the contract Puma SE replaces Nike Inc. as Arsenal soccer clubs jersey supplier. The deal is estimated to 150 million pounds (249 million dollars) over five years. According to the Daily Telegraph, there is also additional 4 million pounds annually in “possible add-ons”. This makes the Arsenals deal larger than the 25 million-pound annual deal between Manchester United and Nike, and the similar-amount-contract between Liverpool and Warrior Sports. Neither Puma SE, nor Arsenal disclosed any financial terms of the contract. Both companies said the agreement “represents the biggest deal in each organizations history.”

The Chief Executive Officer of Arsenal FC – Ivan Gazidis – said at a news conference, cited by Bloomberg: “This is a very important step in terms of our progression on the pitch. As we look from this summer onwards the money will be available to the manager to use in the way that he thinks best.”

Arsenal is currently lead by coach Arsene Wenger and is trying to reach the on-field success of some competitive football clubs such as Manchester United, Chelsea and Manchester City. A 150 million-pound deal between Arsenal and Emirates NBD PJSC was signed in 2012. The teams contract with Nike was worth 9 million pounds a year.

Arsenals revenue for the financial year ended on May the 31st 2013, is estimated to 280 million pounds. It puts the football club on the eight position in the Deloitte LPs richest soccer clubs list. According to Deloitte, the team has a last seasons commercial income that amounts to 62 million pounds.

Puma SE, which is based in Germany, has been going through some changes recently. Since 2009, the company has set some restructuring measures, such as closing stores, eliminating jobs and cutting some product ranges in order to fight its declining footwear sales and at the same time trying to increase its performance-wear credentials.

The Chief Executive Officer of Puma SE – Björn Gulden – was cited by the Wall Street Journal: “Now we will focus on performance, and we will use our assets from performance [sports] in lifestyle advertising.” Mr. Gulden also said at the companys news conference today and was cited by Bloomberg: “I dont think we can find a better partner than Arsenal. They stand for everything that Puma wants to stand for. Excitement. Speed. Global. Arsenal will help us gain credibility as a performance sports brand.”

According to Bloomberg, the current share price of Puma SE is 0.04% up, and its one-year return rate is 4.06% down.